The History of Antique Desks

The earliest form of antique desk is the Bureau; it appeared in France ca. 1650 and was a fall fronted cabinet. They had gate legs to support the fall front when open. The insides had drawers, pigeon holes and a sliding bible well for concealing important papers. The carcasses would have been made from Oak or Pine and finished in Burr Walnut, or oyster veneer. In the 18th Century the gate leg supports were replaced by sliding loppers at each side.  In 1720 the bureau writing section was combined with the chest of drawers. Bracket feet replaced bun feet and decoration was used in several forms from herringbone inlay, stringing and cross banding.

Antique Georgian desks were an important part of the 18th century life, as education was now a necessity for the wealthy class. They were built between the periods of 1714 to the later Regency period of 1830. Fine rooms required larger Georgian antique desks. The major cabinet makers and antique furniture designers of the age, Thomas Chippendale and Thomas Sheraton, produced quality original antique writing desks for this purpose. Georgian desks in the pedestal form were originally used as a ladies dressing table combined with a piece of writing furniture.

The late Georgian era was the first time the larger antique Partners desk was seen with working drawers and cupboards on both sides. These larger desks were mainly used in offices such as banks, solicitors, accountants and other professions that were high up in society. This is why they are usually constructed from superb quality timbers, like Cuban Mahogany or very thick veneers. As Georgian desks are such early pieces of furniture, they usually come with beautiful country charm and character. They come with features like a figured cross-banded top and unusual examples have a pull out brushing slide. 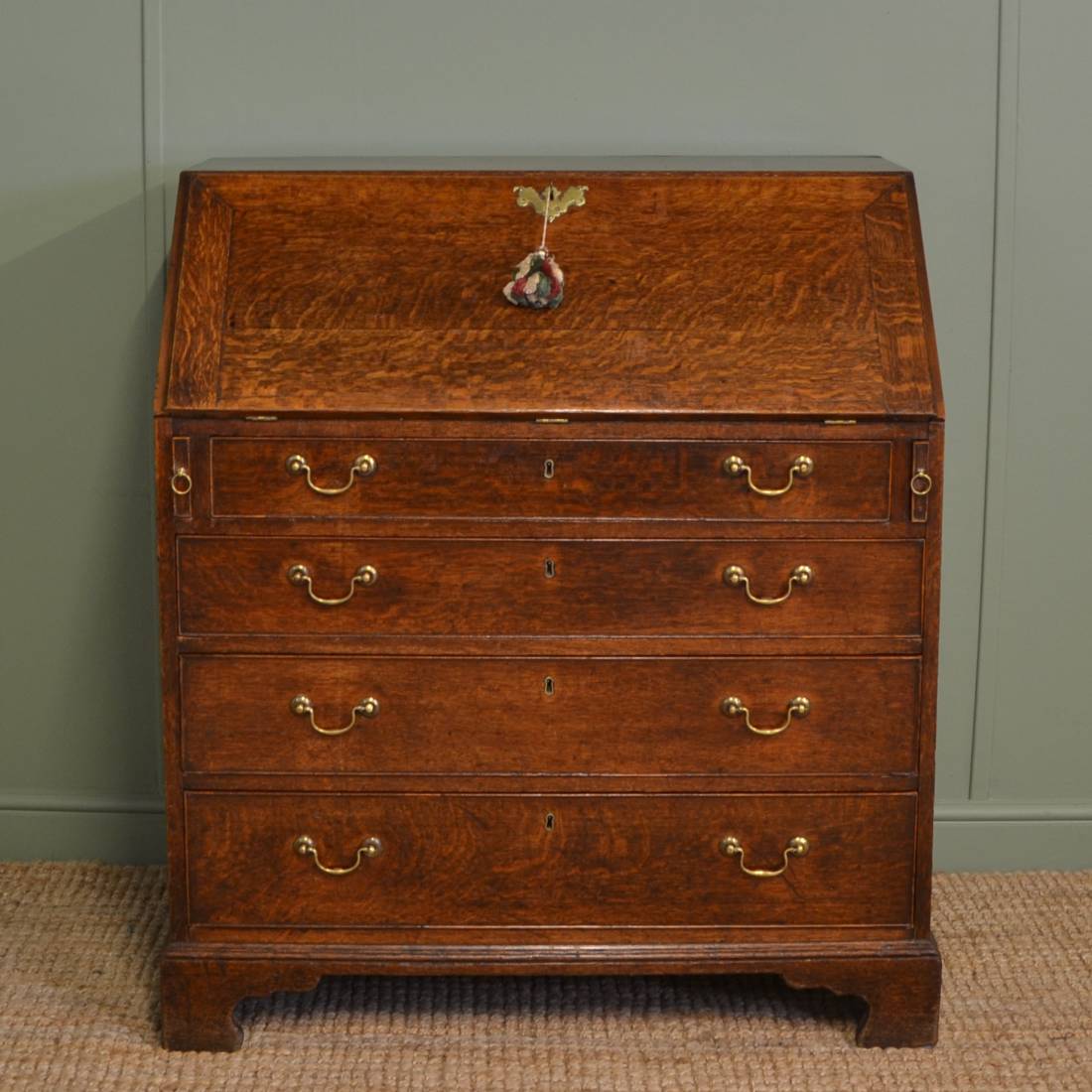 Antique Victorian Writing Desks were built from Queen Victoria’s period of 1837 to 1901. This was the time of new industrial wealth; different designs were made for all the new offices, Libraries and factories. The Victorian cabinet maker created new shapes and designs. This would include the likes of the Kidney shape, bow front and the Cylinder fronted desk. Their designs focused on usability, style, decoration and quality, so you can see a good varied selection from this period. Most Victorian desks will either have a bank of drawers or cupboards, or occasionally a combination of the two together with quality brass or wood turned handles.

Most Victorian desks will have a bank of drawers or cupboards, or occasionally a combination of the two together with quality brass or wood turned handles. They also usually split into several sections so they can easily be moved into a house and are finished on the back so maybe placed in the centre of a room if so desired. Towards the late 19th Century, Neo classical designs were introduced with more exotic woods being used such as Rosewood and Satinwood, as this suited the lighter style of the higher class homes. 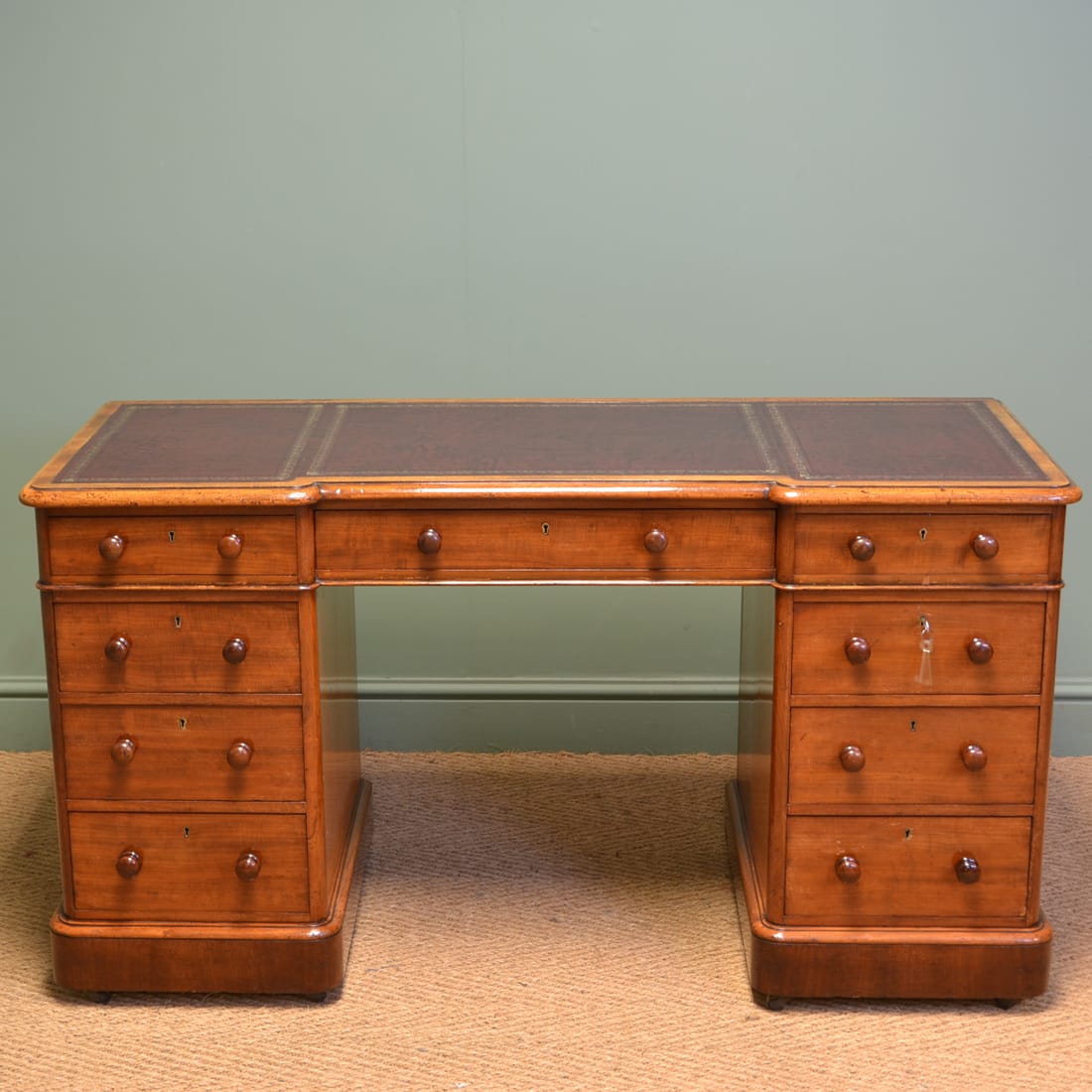 Edwardian Desk were made during the period of 1901 to 1910 and this was the time of change as the Cabinet makers had the use of new woodworking machines. This made it easier to develop new designs and ideas on a larger scale. The Edwardian cabinet makers copied earlier designs with features in their decoration like blind fretwork or intricate inlays. Clever new developments were implemented in Edwardian desks like with the Tambour front, a slatted roll top that opened and closed to lock away all your important paperwork. 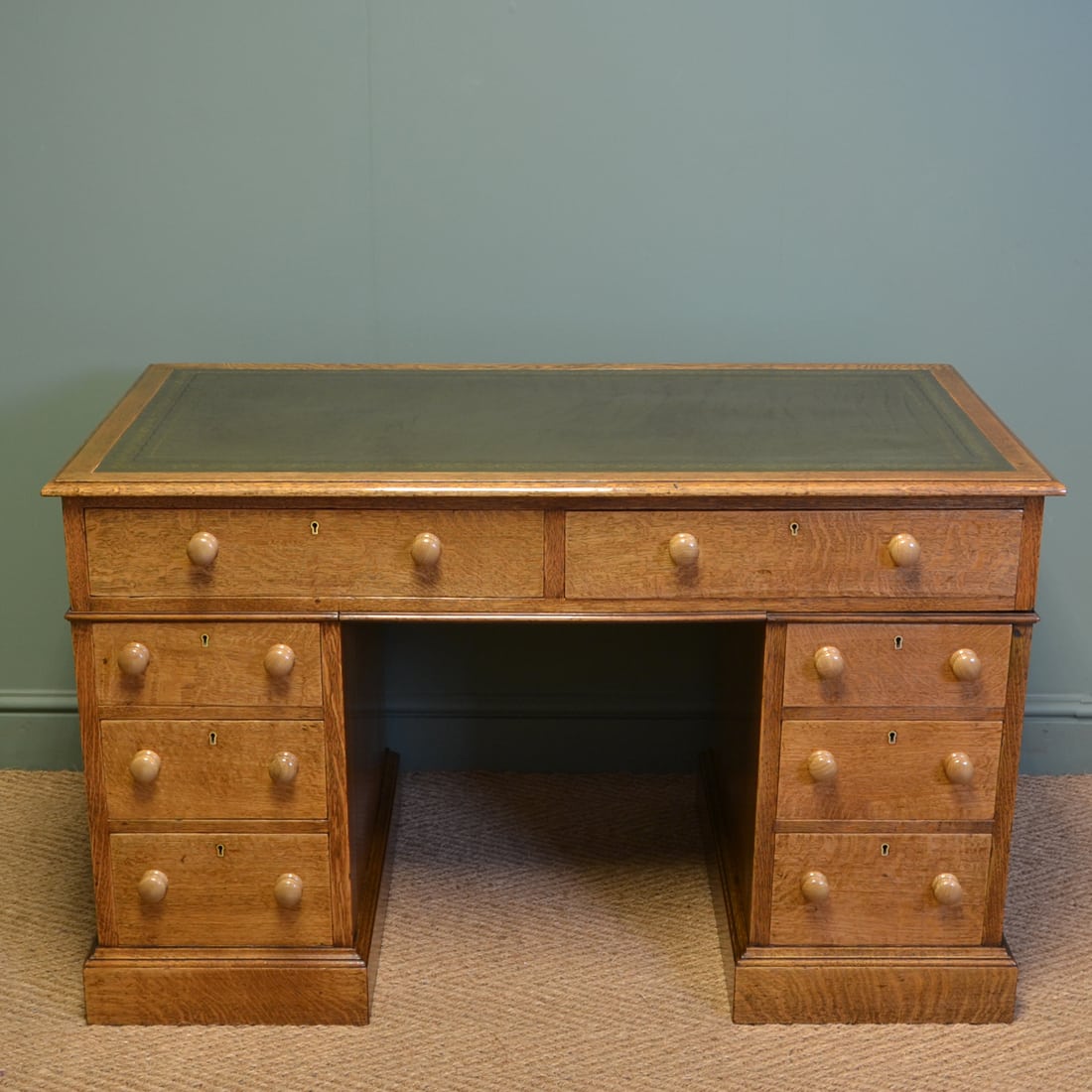 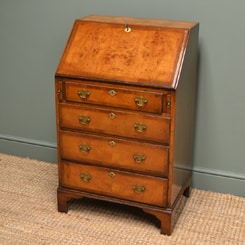 The Antique Bureau is a type of early writing desk with a sloping fall-front, first seen in the mid 17th Century in France. Originally the fall front was supported by gate legs but in the 18th century this was replaced with sliding pull out loppers at each side to support the fall front. Bureaux sit on a chest of drawers base and the interiors can have small drawers, pigeon holes, sliding bookends or bible wells, along with leather writing surfaces. They were extremely popular in the late 19th century as they were built in smaller sizes. 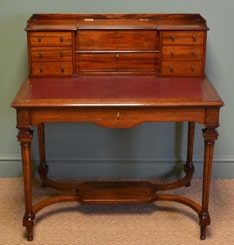 The Antique Bonheur Du Jour is a style of antique desk that originates from France where the name means “daytime delight”. By the late 18th Century they were made in London and simply called ‘a lady’s writing desk’. The antique bonheur du jour is always very fine looking and finished on all sides so does not have to be standing against the wall and can be appreciated from all sides. The best examples would be highlighted with beautiful cross banding in satinwood and have ebony string inlay. The Brass decoration would include a pieced gallery and decorative rococo styling in some of the handle designs. 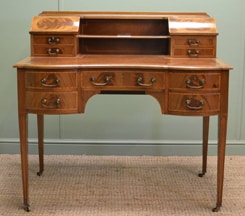 The Carlton House writing desk was originally designed in the 18th century for the Prince of Wales by the renowned English cabinet maker and furniture designer George Hepplewhite. It is named after Carlton House, the London residence of the Prince of Wales at the time. It was noted in the Gillows of Lancaster book in 1796 as a ‘ladies drawing and writing table’. They are made from fine timbers like Satinwood or Mahogany. The best examples were in a curved U shape on the back with lots of fitted small drawers and central small cupboard, some with intricate painted local scenes. 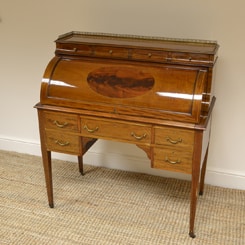 The Cylinder desk has a front in a cylinder shape that opens to reveal a writing surface, pigeon holes and usually stands on fine tapering legs. Only a true craftsman could construct a desk to this design and level of quality, due to the skill levels required in its creation. They have a stunning look of elegance, thanks to the use of Marquetry and Parquetry patterns in their design. The build and finish is hard to find and rarely seen in modern day equivalents and they are not only very useful pieces of furniture but also very decorative to look at. 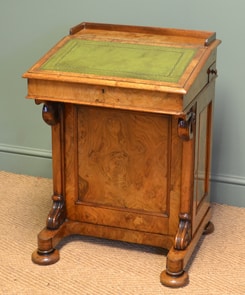 The antique davenport desk was first recorded in 1790, made by Gillows of Lancaster and it states ‘Captain Davenport desk’. It was built and commissioned for Captain Davenport. It is a small Ladies desk with lift up, sloping lid and working drawers on one side along with faux dummy drawer fronts on the opposite side. The best examples have a ‘piano top’ where the top looks like the back of a piano. The top is opened using a pulley mechanism and this reveals secret compartments and small drawers for stationary. They are very fine pieces of antique furniture with decorative features such as glass inkwells and hinged fountain pen side drawers. 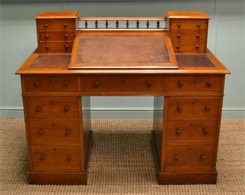 The Dickens desk is an unusual design sitting on a pedestal with a sloping centre with small bank of drawers on either side. This design is supposedly what Charles Dickens wrote many of his later novels. It stood in the bay window of the study at Gad’s Hill Place between 1845 to 1870. They usually had decorative features like a central gallery rail with turned spindles to finish the back of the desk. 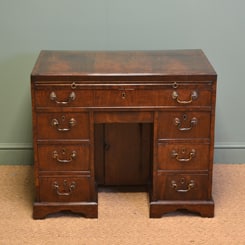 The Knee-hole Desk was made throughout the 18th and 19th century. It would have a central hole where you could sit under to work from. These would usually have a bank of drawers down either side and a long top drawer for stationary. The middle knee hole would consist of a middle cupboard door for additional storage. Occasionally they would have a brushing slide, sometimes polished or occasionally with a baize finish. This was mainly seen in late 18th Century models. 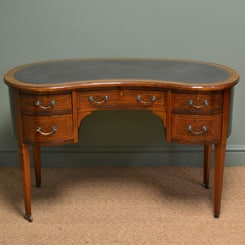 The Kidney Desk was built in the Victorian and Edwardian periods. They were made in a kidney shaped design. This was a very difficult shape to construct as all the drawers would have to be bow fronted. These elegant 19th Century desks were usually used as a dressing table or writing table often with a solid figured or tooled leather tops. They were built by some of the most renowned cabinet makers like Maple and Co or Gillows. The best examples were enhanced by the use of beautiful satinwood cross banding, boxwood and ebony string inlay. 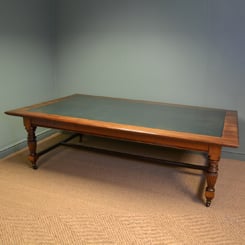 Antique Library Tables or Boardroom Tables were a real statement piece in a large 19th Century Victorian Library or office. They will usually have leather tops and stand on turned legs with porcelain or brass cup castors. The Library was where the gentleman of the house would keep his books, paperwork and also where business was conducted. They were built high quality solid woods but the most rare were in a smaller size in an unusual Madagascan rosewood with ‘landscape’ figuring to the grain.

The Antique Partners Desk is a larger desk with working drawers or cupboards on both sides enabling two people to sit and work at them together. The best examples will have a mirror image of the other on each side and were often a centre piece of a grand office or reception desk to a boutique hotel. 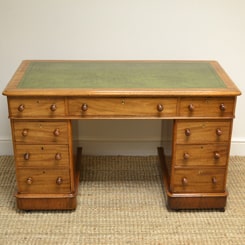 The Antique Pedestal Desk is free standing, usually with a tooled leather top and two pedestals with a bank of drawers down both sides and a central knee-hole. They first appeared in France and the Netherlands in the second half of the 17th century. They usually split into three sections for easy transportation so will fit into most homes without difficulty. The drawers can have either brass or turned wooden handles and they occasionally sit on castors. The best examples will have Mahogany or solid Oak drawer linings. Cabinet makers produced these desks in various sizes, ideal for many different uses. 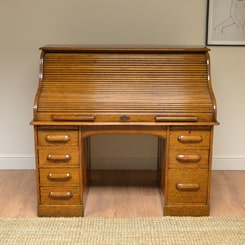 The Antique roll top desk has a Tambour slatted front in Oak or Walnut usually from the Edwardian period. They stand on a single or twin pedestal and the Tambour fronts are in a D shape or more sought after S shape. The interiors will have several small drawers and pigeon holes for paper and envelopes. Due to their large size, they offer a good writing surface. Often they will have a locking mechanism, where the top rolls down and automatically locks all the drawers when the tambour front was closed and locked. 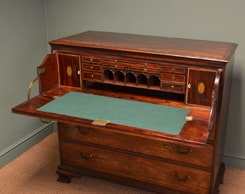 The Secretaire is the meaning for an enclosed writing desk within a folding front. The writing section was hidden behind a folding drawer front or cupboard door on brass hinges.The antique Secretaire was first introduced in the late 18th Century Georgian period by furniture designers like Hepplewhite and Chippendale.The Antique Secretaire Desk was similar to the bureau but more square in shape on a chest of drawers, with a deep pull out top drawer that folded down to reveal stationary compartments and a leather writing surface. 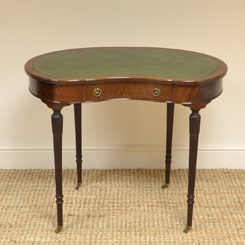 Writing tables were first developed in the 18th Century Georgian period but were far more commonly used in the Victorian era. They were produced in a wide range of shapes and sizes, and will usually have a leather top.  They were made using some exotic woods such as Rosewood with brass inlay, standing on solid brass castors so could easily be moved around the home. Although they were very fine looking pieces of antique furniture, they were built to be used on a daily basis so were robust in their construction with solid timbers used.