Shop for Antique Bookcases for sale on Antiques world. We offer a large selection of traditional antique bookcases from the Georgian, Victorian and Edwardian periods with cheap UK delivery.

The History of Antique Bookcases

Antique bookcases provided 18th and 19th century furniture designers a new suitable subject for architectural themes. This offered the cabinet maker to build the antique bookcase with new ideas and inspiration with themes used throughout the home. Massive breakfront library bookcases were made with ornate cornices and pediments which in turn were decorated with urns, busts and decorative carving. These major pieces of furniture were viewed as statements of wealth, culture and education too.

The Georgian Bookcase dates throughout the 18th Century, Georgian period from 1714 to 1837. Antique Georgian Bookcases were owned by the very wealthy, as only the rich would own a large collection of books during this period. They were grand freestanding pieces built to fit in as part of the architecture of the home, often made for manor houses, Libraries or offices.

The renowned cabinet maker Chippendale preferred to use Mahogany due to its durability and fine finish that could be achieved, so you see fine quality mahogany bookcases from this era.

The upper part will always be glazed (often with astragal glazing bars) to display books and the lower part having drawers or blind cupboard doors. Georgian Bookcases can be very large in size and in unusual shapes like the break front. The level of craftsmanship used in their construction is self evident using only the best quality brass fittings, including swan neck handles, unusual scrolled pediments with Grecian design mouldings and will stand on bracket feet or break-fronted plinths.

It is always best to try to find these bookcases in original condition as possible with charming character from years of use along with the lovely old wavy glass panels that would have been produced by hand. 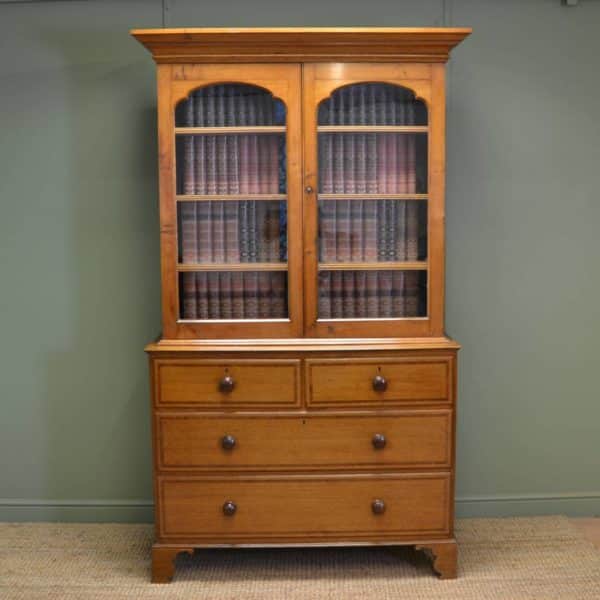 This same design continued throughout the William IV and Regency periods but with slightly more finer details and the use of unusual woods like figured Rosewood, Zebra wood and decorations like Corinthian columns and Brass inlay. These traditional antique bookcases are simple and elegant, constructed from high quality timbers and would grace any home; they are very sought after by collectors. 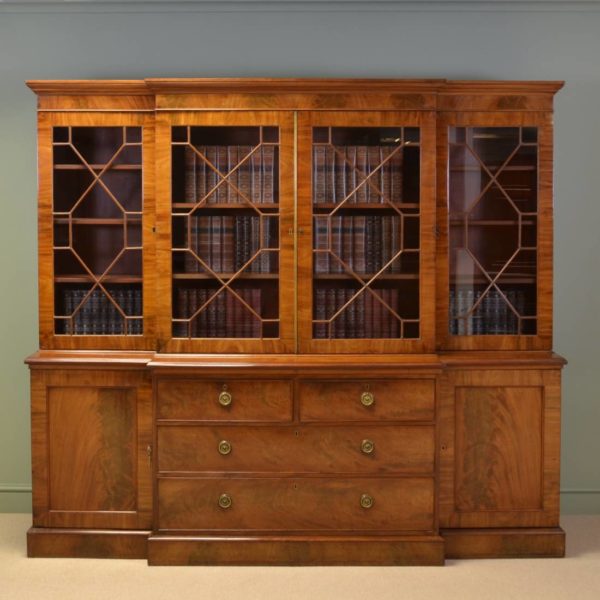 The Victorian bookcase dates from Queen Victoria’s era of 1837 to 1901. These 19th Century Antique Victorian Bookcases were made with practicality in mind, as they produced many new designs for functionality. They often have rounded corners, decorative corbels that were exceptionally carved. They were originally, highly French polished and late Victorian models produced carved decoration.

The new wealth of the Victorian period meant more houses were being built and therefore more furniture was produced to fill them. Mahogany and Walnut was the main timber used in their construction by cabinet makers such as Gillows. They produced tall antique bookcases for Libraries, offices and Schools. 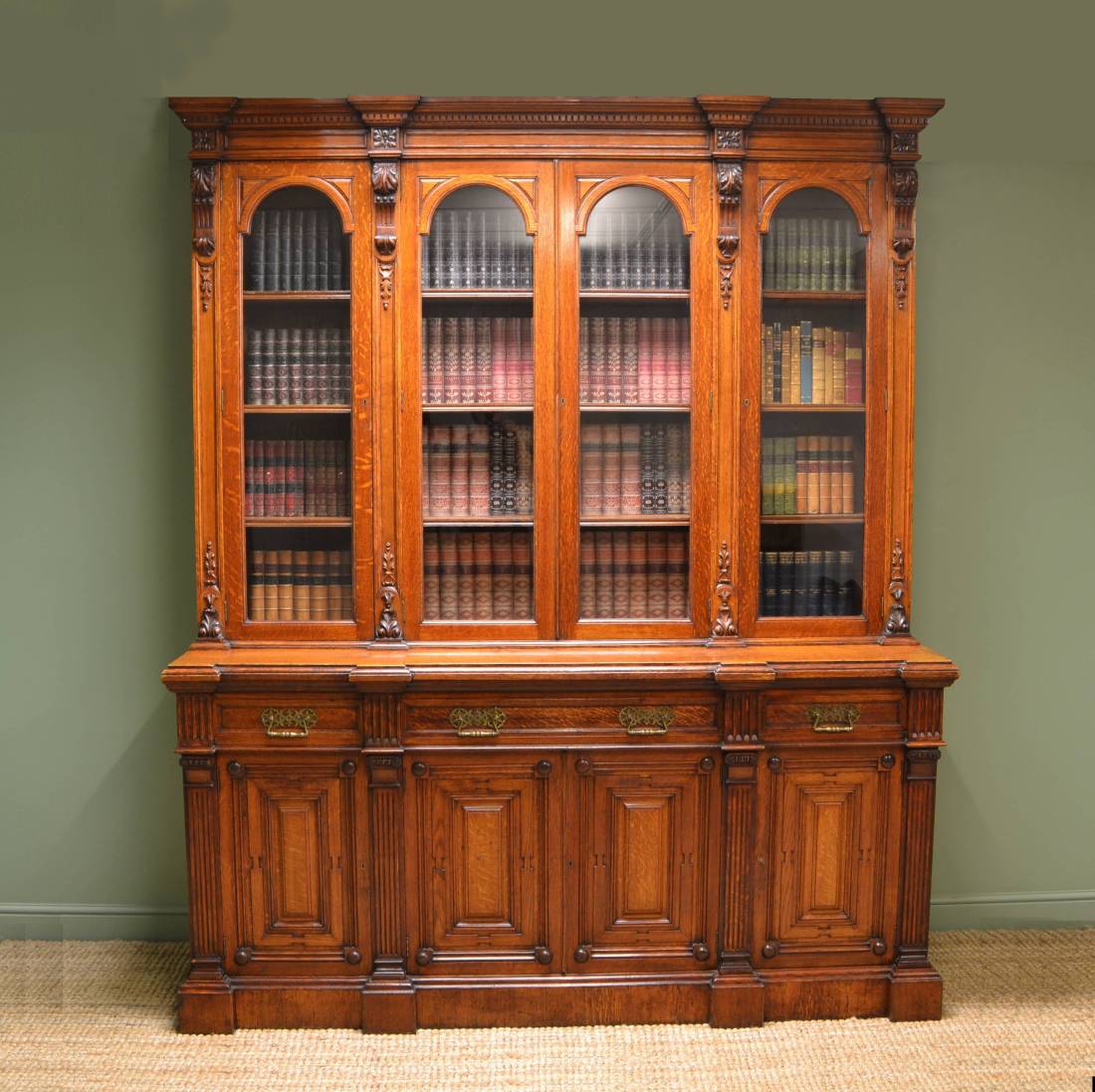 The Traditional designs were still made but new interesting features were fitted like the secretaire drawer on the bureau bookcase. They created a piece of office furniture that combines writing whist offering ease of access to your books above you. The drawer interior contained small very usable small drawers and several pigeon holes for your stationary.

It was fashionable for the display of fine leather bound books in the 19th century so small antique open bookcases were produced, some being revolving. They were open fronted, very simple in design and had adjustable shelves. Occasionally they were made to stand freely in the middle of the room. 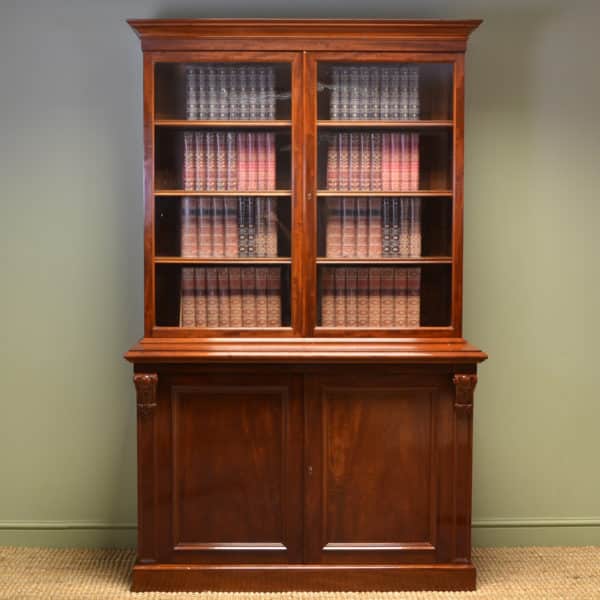 The Edwardian Bookcase was from the Early 20th Century, during 1901 to 1910. Edwardian bookcases were starting to be mass produced with the use of new machines. Often earlier styles were copied from Sheraton revival, Queen Anne, Hepplewhite to more heavily carved Jacobean and Gothic designs. Wooden antique bookcases from this period were made from American Walnut, figured Burr Walnut to more interesting fine Satinwood. These were made in new styles such as Art Nouveau with fine flowing lines to more solid Arts and Crafts with detailing such as oak leaf and acorn carvings. Antiques are still very reasonable to buy; you can get a quality piece of antique furniture that is usually cheaper than a modern reproduction. Here on Antiques World, we have some beautiful antique bookcases for sale.

Please Note – We will be closed from 9th August until the 17th August. No orders will be dispatched during this time. Thank You. Dismiss