The History of Antique Furniture Artciles

See all The History of Antique Furniture artciles

Types of Feet and Legs on Antique Furniture

The History of Georgian Furniture

Antique Georgian Furniture refers to styles that evolved during the long reign of England’s three Georges from 1714 to 1820.

Georgian furniture is well designed and built to a high standard, using quality woods such as Oak and Mahogany, with the use of dovetail joints, clout nails and handmade iron screws. Some drawers would operate using mortise-and-tenon joints. Georgian designs formed a distinct contrast with earlier pieces as a new simplicity was sought after. English examples were mainly plain, simple and followed architectural lines of buildings. Georgian furniture was crafted by hand and solid woods were readily available along with good metal-wear so quality was paramount.

As the British Empire expanded throughout the world, more woods became available. This lead to a change in fashions during the reigns of George I and George II from the replacement of Walnut to Mahogany (Mahogany was imported mainly from Cuba and Honduras). Cabinet makers liked the new close grained wood which was much harder and was not prone to wood worm unlike the previous Pine and Walnuts used in construction. Mahogany was more suitable for the grander pieces of antique furniture, which were in high demand for the new taller buildings. As Mahogany was a strong timber, it made furniture long lasting and you could achieve a rich dark red colour which was sought after in the period.

In the early Georgian period the main styles were similar to the Queen Anne design but with slight modifications, pieces were given more elaborate pediments and sturdier cabriole legs. Early antique Georgian furniture was mainly simple like the cricket table which would have a plain solid top supported by three simple turned legs. Plain Oak hanging corner cabinets (with features like fielded panels) along with refectory tables, chest of drawers, coffers and settles were seen. The more elaborate pieces were constructed from Walnut, like a chest on stand, sometimes with ball and claw feet and cabriole legs. Card tables also became popular in the same construction and style.

By mid Georgian times, Britain got wealthier and created more middle class people who wanted better pieces of Georgian furniture; this was a real boom for the English Cabinetmaker. Some of the greatest furniture designers like Thomas Chippendale, promoted French Rocco style and Robert Adam introduced the “Greek” Neo-classicism to Britain. George Hepplewhite and Thomas Sheraton were also two more well known cabinet makers who had a huge impact on furniture design in the 18th century. These styles are so popular they were copied throughout the Victorian and Edwardian eras and are still copied today. The simple straight lines were starting to change to more curved styles with motifs and ornamentation. The Hepplewhite and Chippendale chair sets, tea tables and dining tables were now popular. Bookcases became less architectural looking and more delicate in design with swan neck pediments and astragal glazing.

By the late Georgian period there was more use of painting, inlay, veneer, light carving and Marquetry, giving a decorative edge to antique furniture. Mahogany was still the first wood of choice but satinwood was starting to become quite popular. Bow fronted, concave fronts and cylinder shapes were becoming fashionable and grander pieces were being made such as huge break fronted library bookcases along with large pedestal desks. Brass and ebony were increasingly used for decoration in the later Georgian furniture as was banding with string inlay. The most common foot was the bracket foot and the later pieces sometimes had an ogee bracket foot.

If you are interested in antique Georgian furniture for sale, see our wonderful selection available on antiques world. 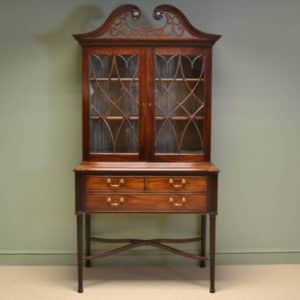 You can see with many Georgian pieces, unusual features like this stunning rare Georgian antique bookcase ca 1770. It has a moulded cornice with dental moulding above two astragal glazed doors and the interior has three adjustable shelves. The lower section of the antique bureau bookcase has a moulded fall front and the interior has a green leather writing insert, several flamed mahogany oak lined drawers with string inlay and a beautifully figured, cross banded cupboard door. Below is a very unusual drawer formation with four small graduating drawers on the right side and four longer graduating drawers on the left side. All the drawers are cock beaded, oak lined and have brass swan neck handles. This is a truly stunning piece of antique furniture. 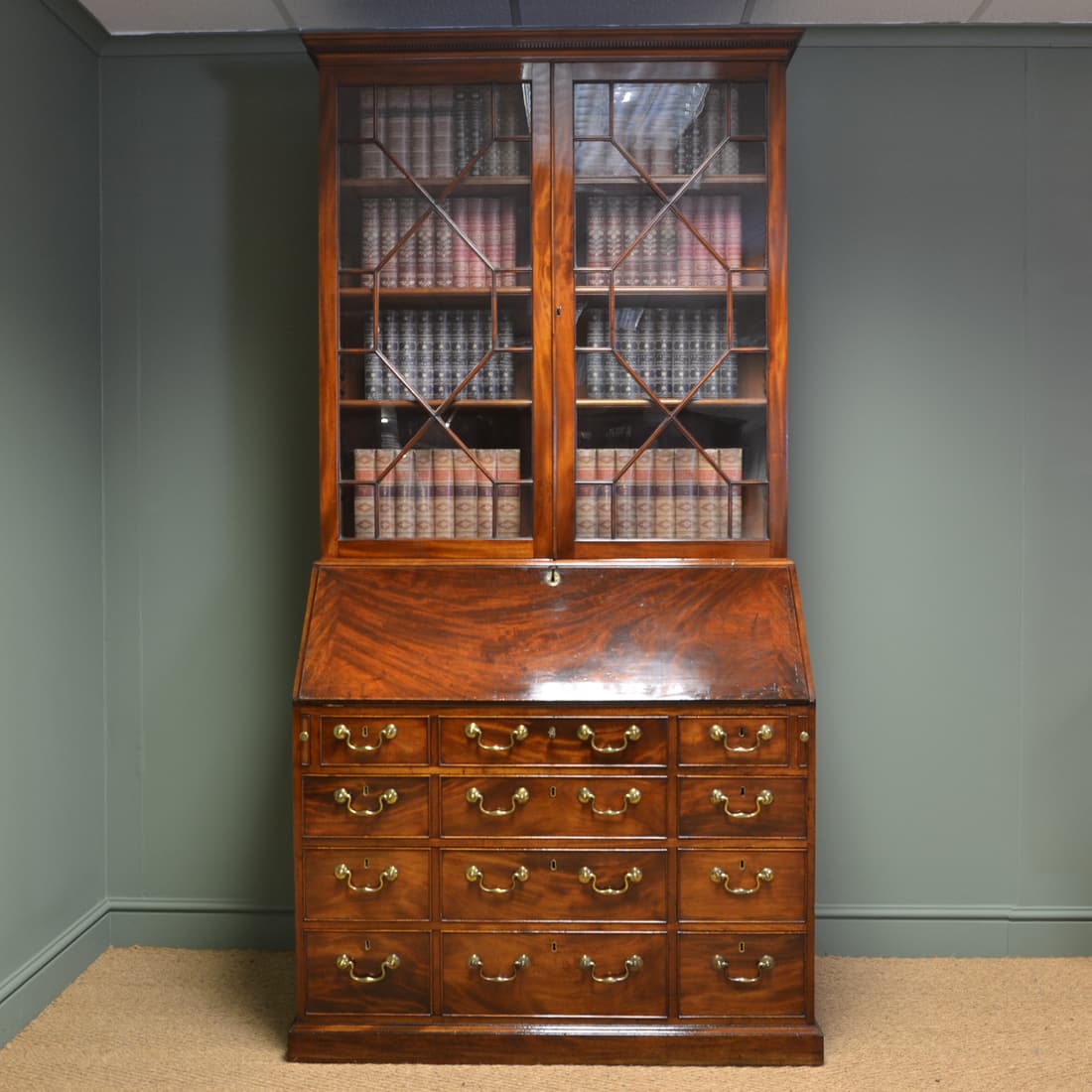 This is a good example of an Ogee bracket foot on a fine Oak antique Georgian chest of drawers. It has been constructed by a true Georgian craftsman, with only the best figured oak timbers used. It has a rectangular top with moulded edge sitting above two over three drawer configuration, with finely turned original handles and unusual key escutcheons.

This small antique Mahogany Georgian writing desk /  Bureau circa, 1790 shows Chippendale influences in its design. It is of beautiful small proportions and was recently fully restored so in excellent condition for its age. The fall front has a moulded cross banded edge with Rococo key escutcheon and the graduating cock beaded drawers have cross banding along with spectacular Rococo Brass handles. The different grades of Mahogany used can clearly be seen in the next two items. This was dependant on where in the world the Mahogany was imported from. This George III antique sideboard has the most spectacular bow fronted shape along with a very rare plum pudding mahogany grain, finished with a boxwood banded edge.  This sits above an unusual tambour front flanked by two cupboard doors. Each section has decorative oval brass handles, rosewood cross-banding and the most striking leaf inlaid decoration.

You can clearly see the difference in this Georgian antique cupboard as it has been constructed from figured Cuban Mahogany Timbers so is more dark and dense. This wonderful linen cupboard is the perfect example of the work of a true Georgian cabinetmaker. It has a moulded top with a beautiful walnut cross-banded edge above two cupboard doors with brass key escutcheon. It has central raised fielded panels with superb figuring. The interior has four oak lined sliding linen trays ideal for storage. The lower edge is moulded and the piece as a whole stands on shaped bracket feet. 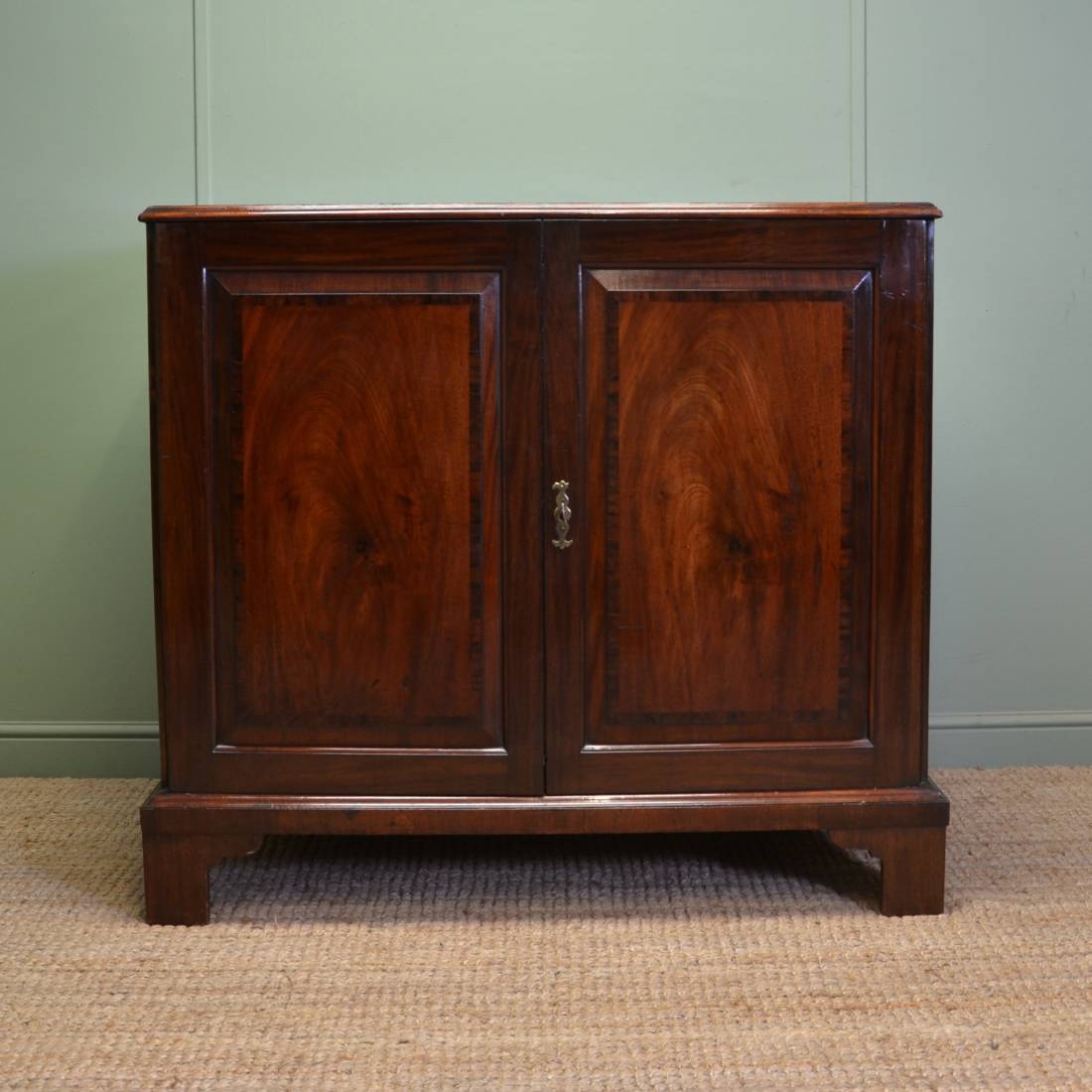 In country furniture locally sourced timbers were used in construction, especially in Georgian chairs. This Charming set of Six Georgian Elm antique chairs have that fantastic country feel.  They have curved backs with pierced back splat and beautiful turned upright supports and the most magnificent figured shaped seats. 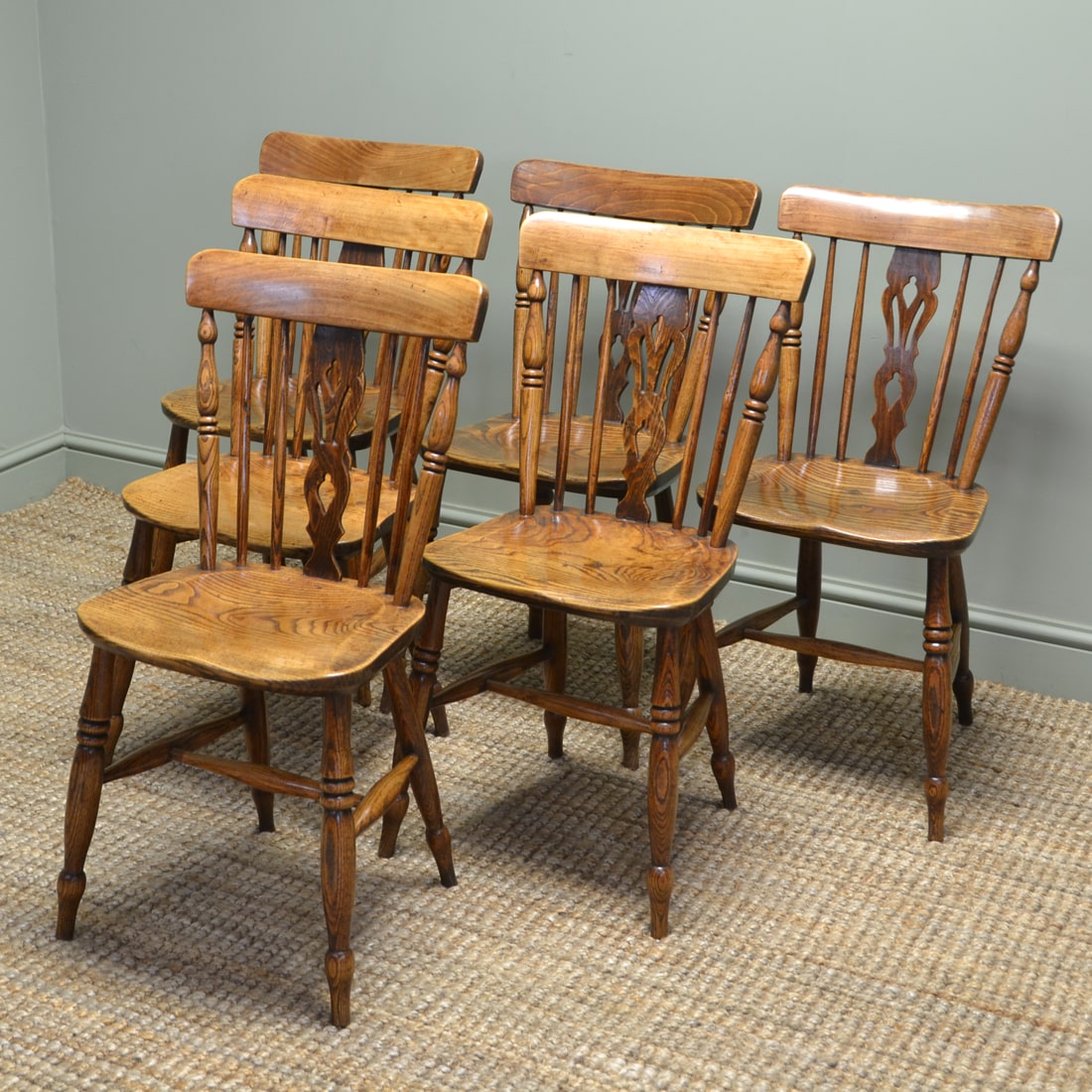 Hepplewhite designs were used, often in tables. This fine quality Hepplewhite Georgian antique table dates from around 1810. It has a beautifully figured bow fronted top with a figured oak lined cock beaded drawer with the original Hepplewhite design swan neck handles. Although is is plain and simple to look at, the quality can be seen with the fabulous quality timbers and fittings.