Antique Sideboards for sale, including Chiffoniers and Credenzas. We stock a selection from the 18th Century Georgian period to 19th century antique Victorian Sideboards.

The History of Antique Sideboards

Antique sideboards were originally designed for use in a dining room with your buffet or side server. They really were a development from the earlier rustic dresser, but in the late 18th century, homes were looking for finer pieces of antique furniture and so the sideboard was developed.

The Victorian antique sideboard was a development from the Georgian side serving table. Pedestals were added on either side of the serving table in the later Georgian period to add additional storage for wine bottles and plates. There would be a brass rail fitted along the back with hanging curtains, to prevent food from being splashed on the wall when meals were being served.

Victorian sideboards were made more practical by adding a solid back usually finely carved as the fabric would often get stained. A large mirror back was also sometimes added to reflect light into the room. Rather than just having a pedestal on each side, the space between pedestals was enclosed with an additional cupboard, adding more storage space as this was far more practical.

Linen drawers were added into the interiors along with a cellarette drawer to store and keep wine bottles cool. Earlier 19th Century sideboards were mainly in Mahogany but new more interesting woods were introduced like Rosewood and Oak.

These are truly magnificent Victorian pieces of furniture were sometimes with large proportions and a real sense of opulence.

Smaller examples were made and called the Chiffonier. It was for the same purpose, but far smaller in proportions, so ideal for the areas such as alcoves in your home. Edwardian sideboards were often reproductions of older designs, using unusual shapes like the serpentine front with cross-banded inlays. They would often be smaller and in the antique chiffonier design. 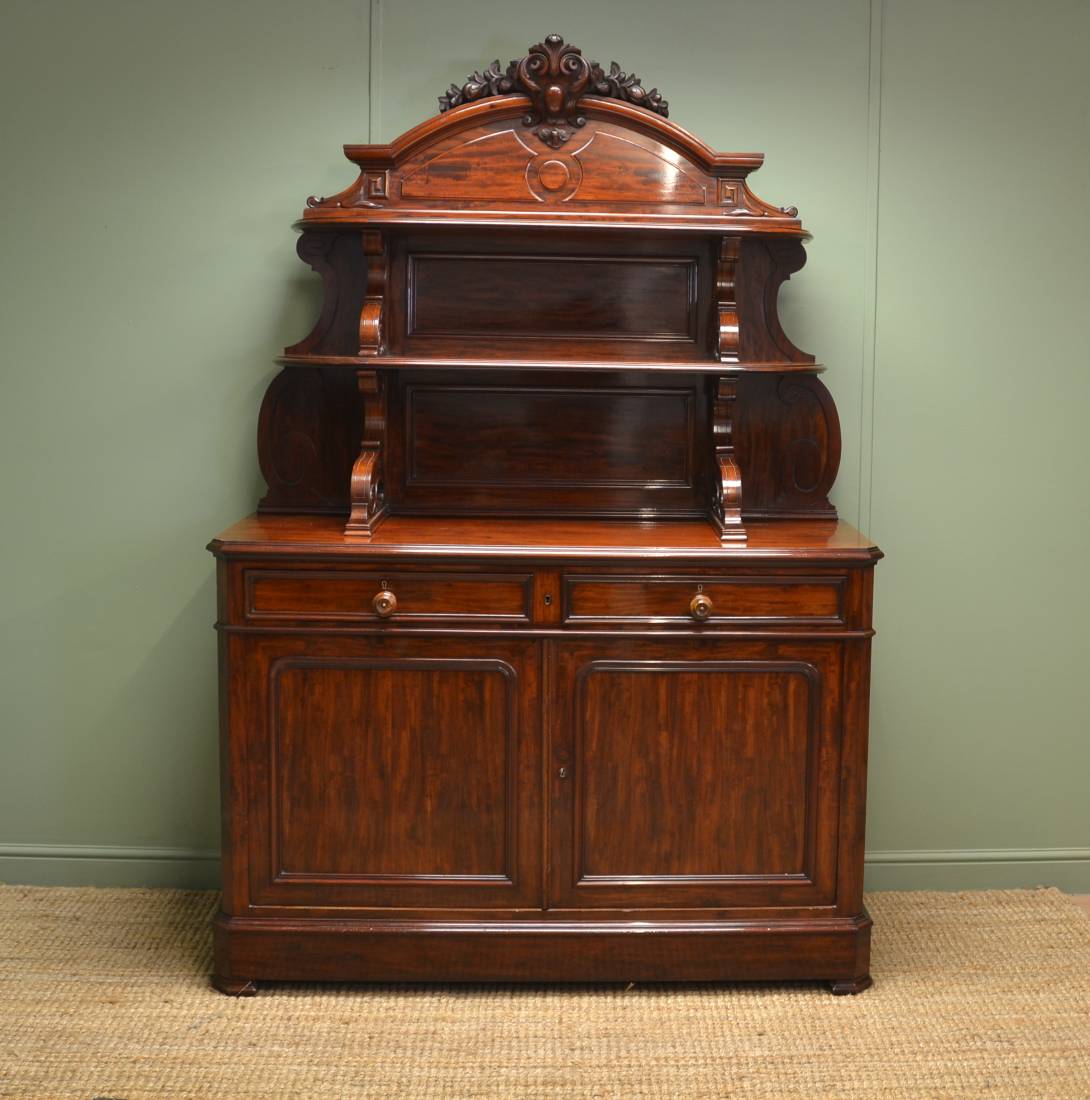 Georgian serving tables were used in the dining room but arrangement was not very practical in smaller middle class homes of the 18th century. Pedestals became incorporated into the serving table and so the Georgian antique sideboard was born.  Georgian sideboards usually had six legs and were straight, bow fronted or sometimes serpentine fronted. They had a shallow central drawer to hold cutlery and at either end a cupboard with a deep drawer. The drawer was often lined with lead and partitioned to hold wine bottles, known as a cellarette. They were mainly constructed from the finest quality Mahogany timbers, would stands on wonderfully angled tapering legs with spade feet and as they are over 200 years old will display the typical charm and character marks expected in a piece from this period, which add to the sense of history. 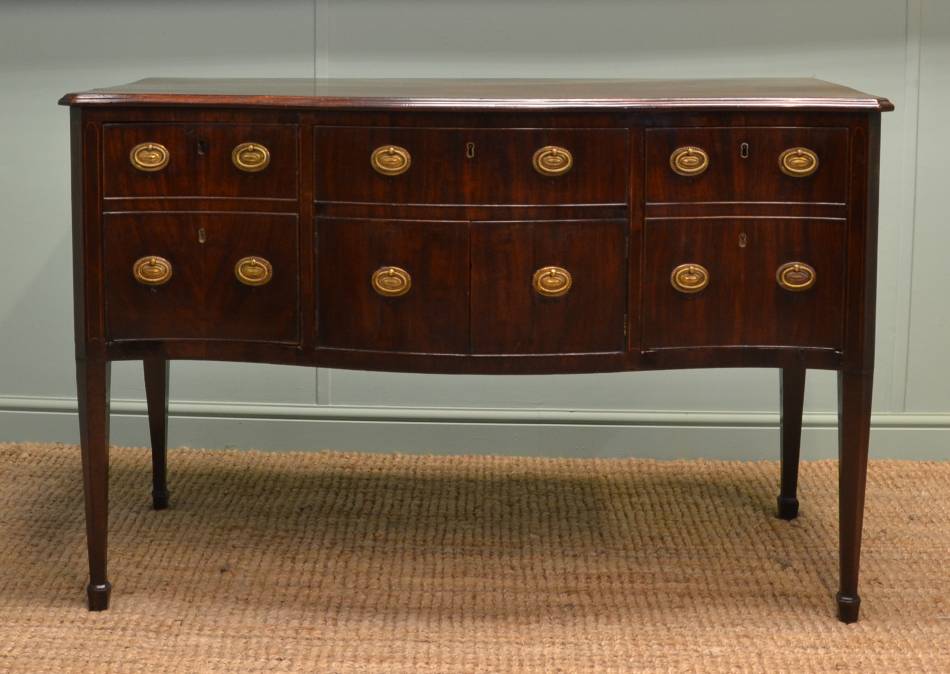 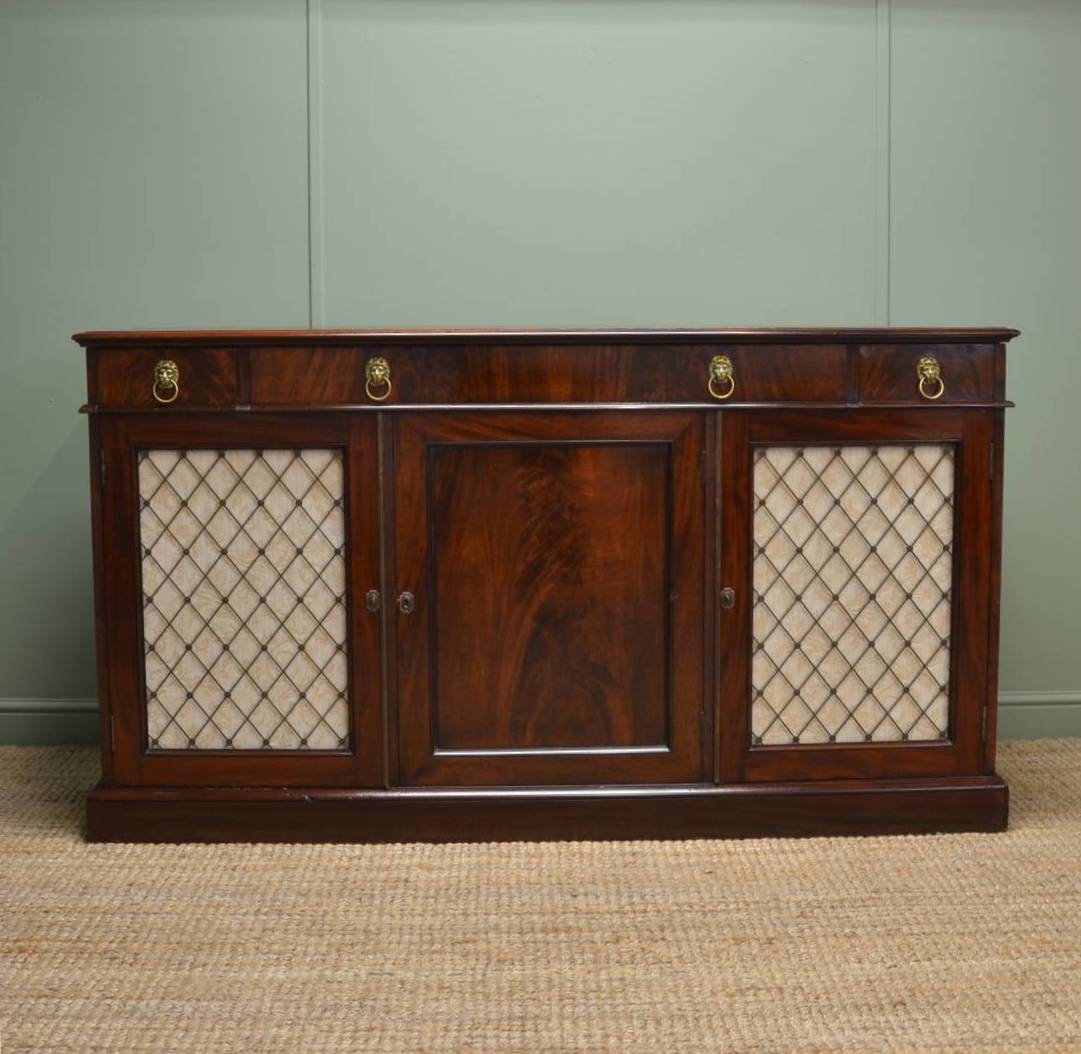 This is an example of a Pedestal Sideboard with a swan neck pediment and magnificently carved central ‘Green Man’ decoration. 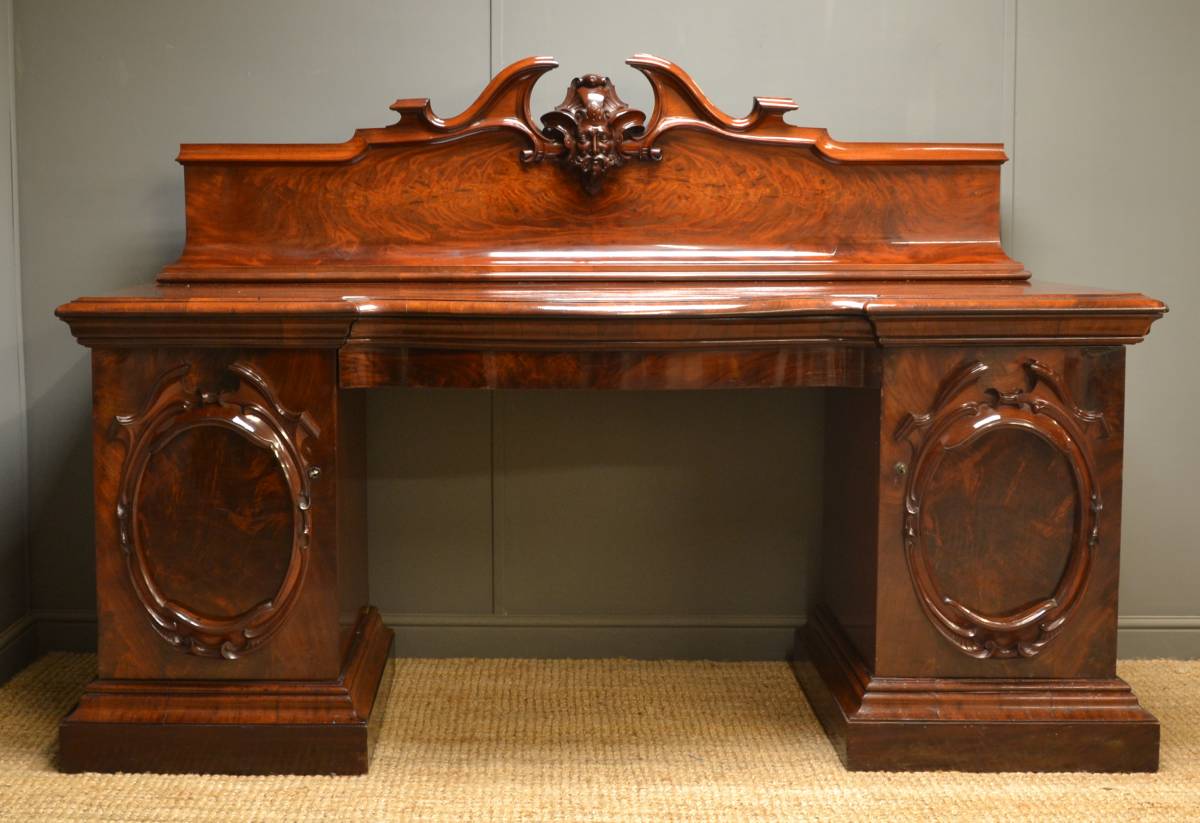 This Victorian Mahogany Antique Sideboard is unusual as it has a Glazed Display, moulded edges and rounded corners. The glass like finish of the polish suits the rich medium shade of the mahogany perfectly making it look totally stunning and suitably grand. This stately piece is constructed from a quality of mahogany no longer available to today’s craftsman due to its rarity. 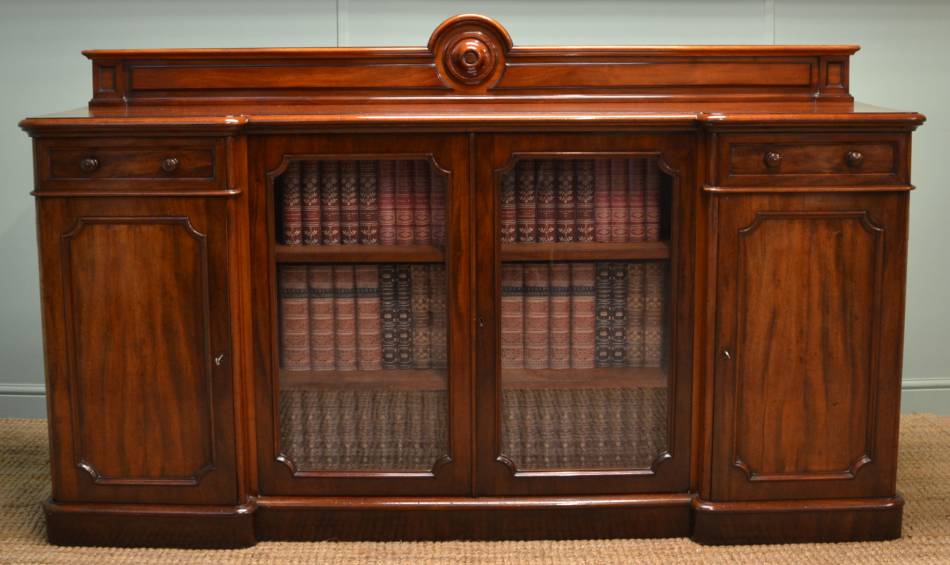