Antique Card Tables or also known as the Antique Games Table was first introduced in the early 18th Century in the Queen Anne design, with figured walnut or Oyster veneering. They stood on cabriole legs, usually with carved decorations like a shell motif  and the legs were on a gate leg action to support the top when opened up. These types of antique tables were uncomfortable to sit at, as the stretchers and legs got in the players way so cabinet makers came up with a better idea. Games Tables were fitted with a single hinged back leg that swung out to support the top and then a concertina mechanism was introduced in the mid 17th century to extend the back legs and frame. When the tops were open they had dished recesses for candlesticks and wells for counters or coins called counter wells. During the Late Georgian period Mahogany was the fashionable timber and was easier to work with for cabinet makers. Gambling and Card playing was more popular than ever and so the designs became more elaborate and craftsmanship became far superior with super quality timbers used like Rosewood or Satinwood being used. New shapes were introduced along with more robust designs; from the semicircular antique card tables, decorated with marquetry or cross banding to the Regency swivel top card table, having a top that would now swivel and open with a green baize playing surface, under which can be found a concealed games storage compartment (ideal for card storage).

Chinese Chippendale Designs were introduced in antique card table, like this example with the most spectacular inlaid top and decorative carved edge. It has a fretwork carved frieze, stands on the most stunning triple pillar turned legs. 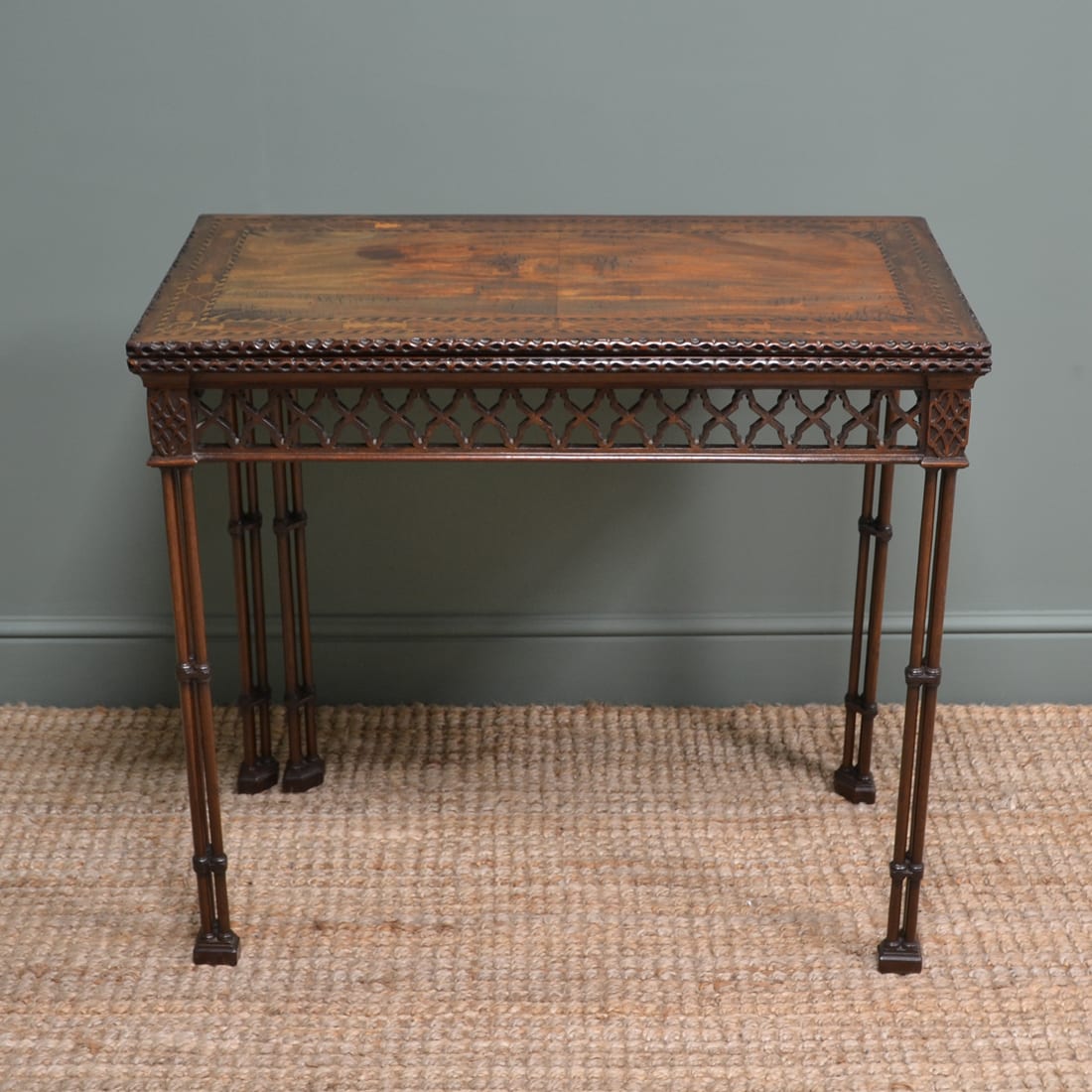 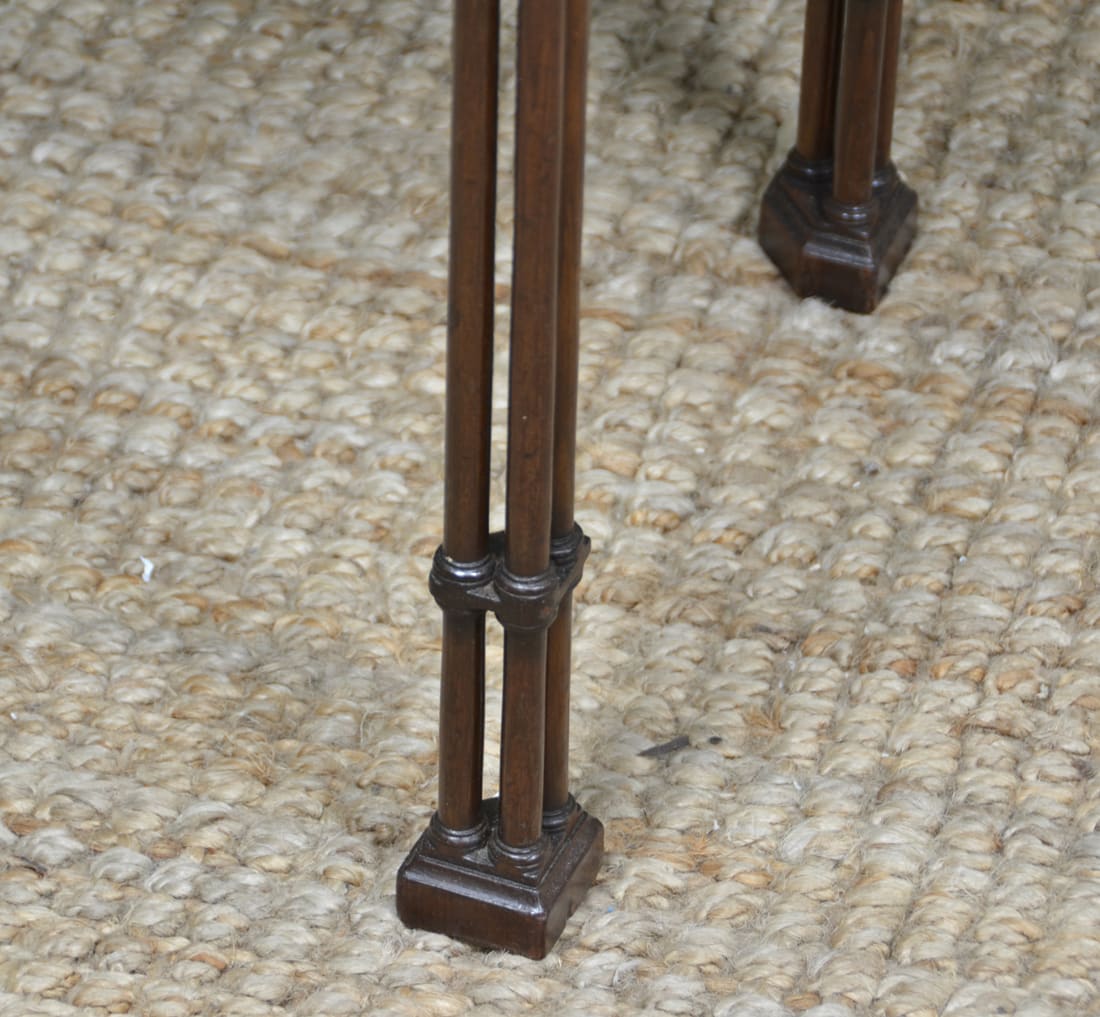 As games tables were an essential part of entertainment to the household, so a fine piece of furniture was needed to fulfil this purpose. This lead to Victorian cabinet makers offering more unusual designs like the Envelope card table. The top swivels and four segmented sections open up to a square shape offering a large games playing surface and counter wells. 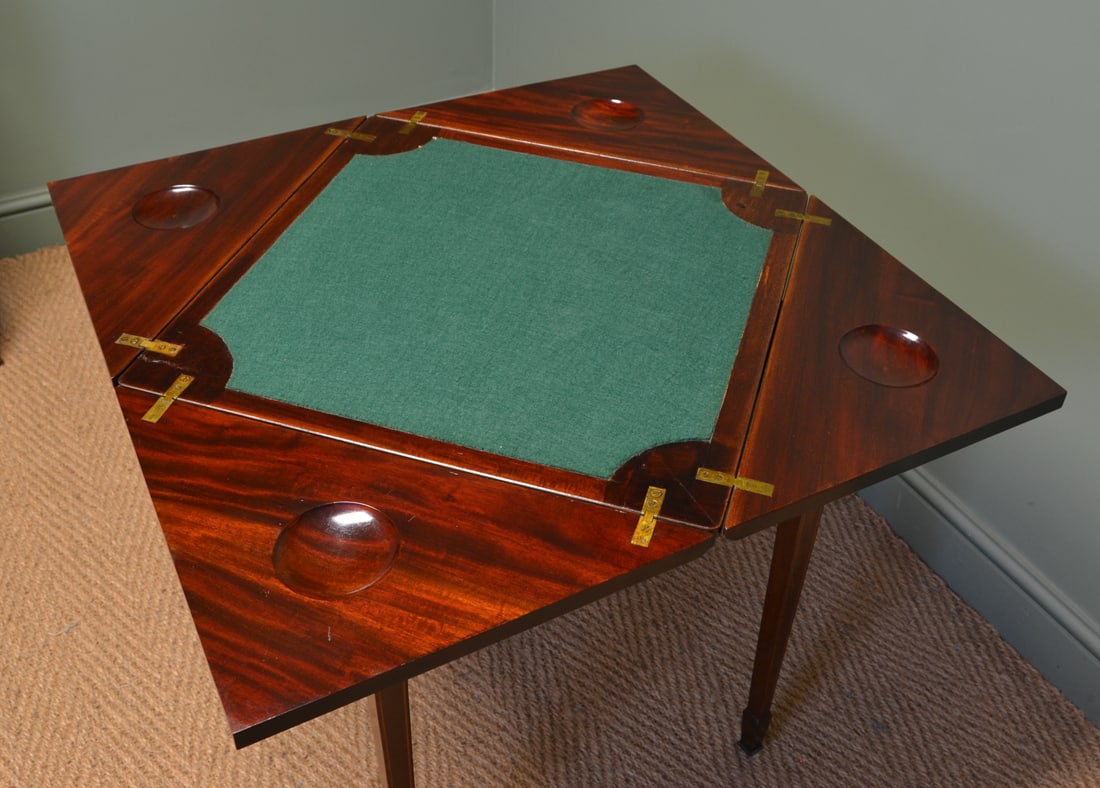 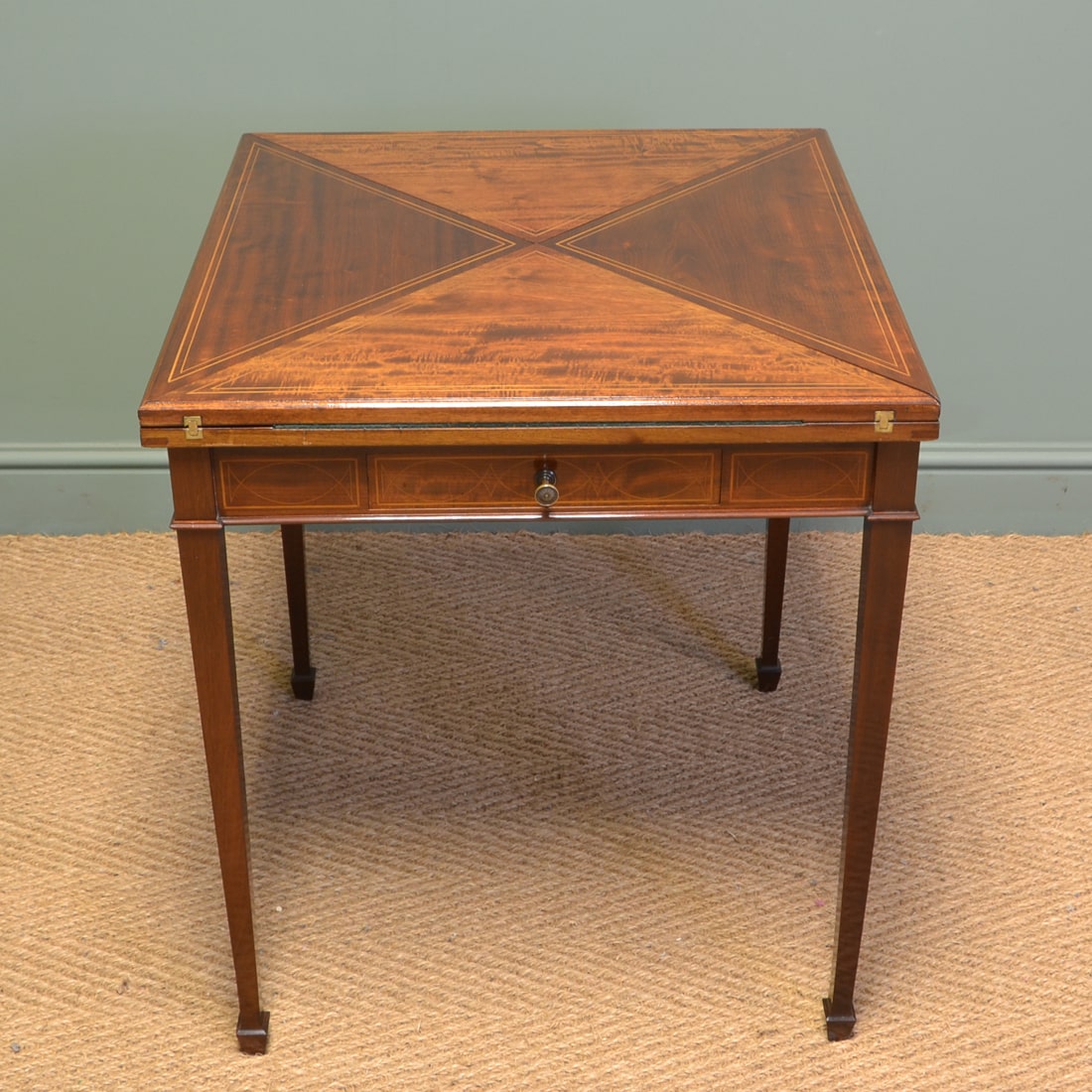 Satinwood cross-banding and stunning floral inlaid decorations were used on antique games tables with bow fronted D Shapes held in place with brass fittings once closed. These could also be used as small console tables, when not in use as they were of a practical smaller size. Quite often they were left in hall ways or behind the sofa when not in use, today they make the ideal piece of furniture to hold a lamp on. 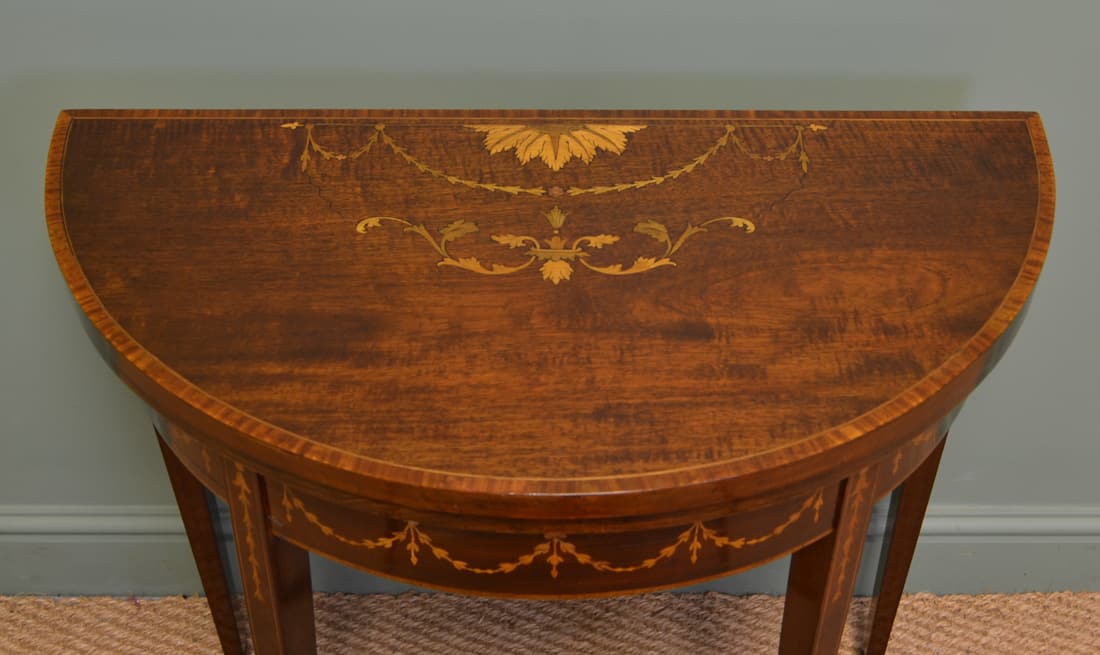 The ingenious of the Victorian craftsman, decided to combine several pieces and uses into one piece of antique furniture. This was usually done for extremely wealthy families in stately homes. A good example is this Spectacular quality figured Burr Walnut Victorian antique games table work box and was most probably custom built. It has the most skilfully Inlaid Top using rare Tunbridge ware inlay. The top opens to reveal an inlaid chess and bridge board.  Below is a fitted drawer, then work box, used for knitting and sewing materials. Again this is all done a beautifully figured walnut and elegantly shaped.  This truly unique piece stands on turned upright supports and a turned cross stretcher and elegant scrolled carved legs and white porcelain castors. 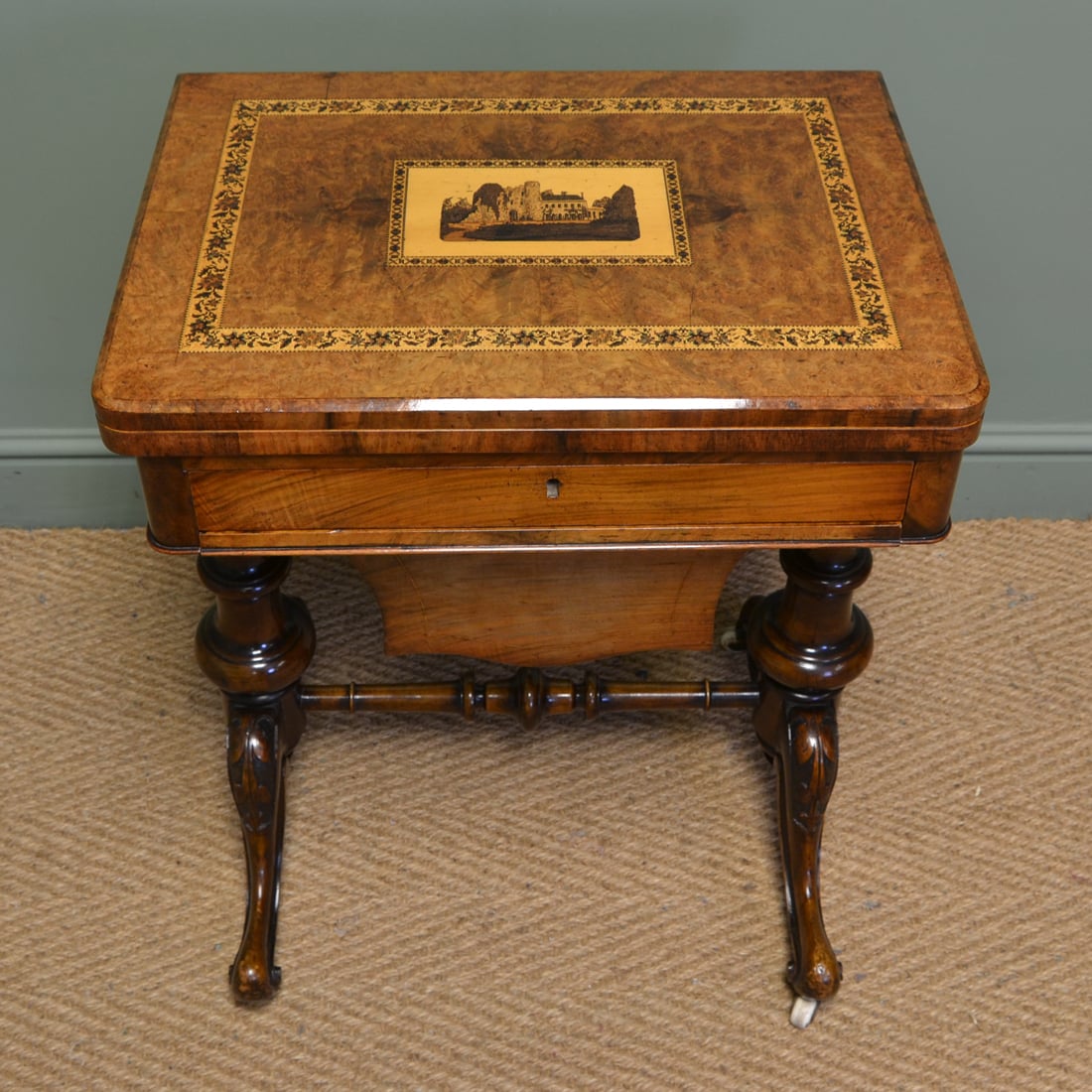 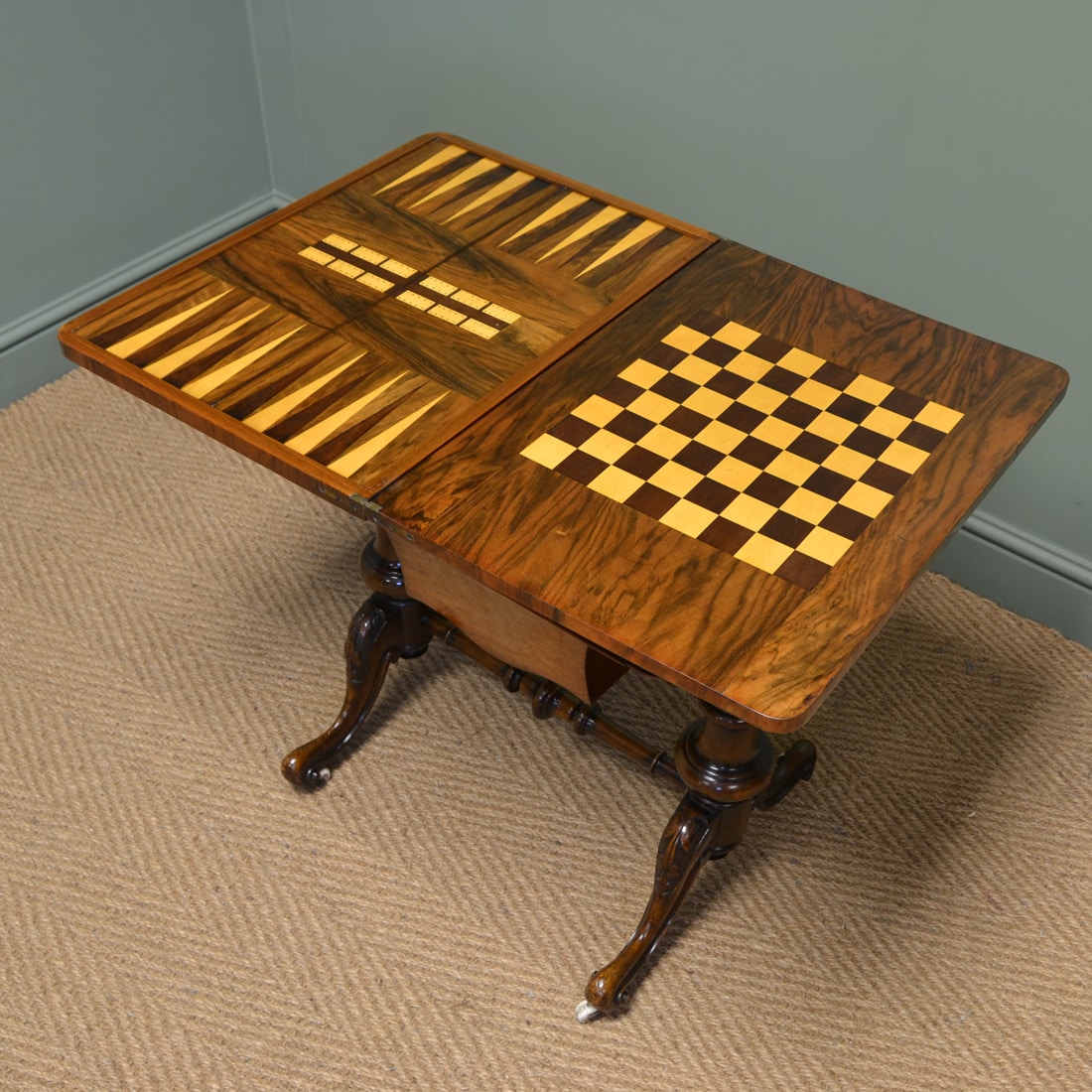