Shop for Antique Chest of Drawers for sale on Antiques World.  We offer traditional early Georgian, Edwardian and Genuine Victorian chest of drawers, all are displayed online with new stock being added on a regular basis.

The History of Antique Furniture Artciles

See all The History of Antique Furniture artciles

Types of Feet and Legs on Antique Furniture

The History of Antique Chest of Drawers

Antique chest of drawers have changed dramatically over the centuries due to better tools, better cabinet makers and wealthier people leading to larger demand. The earliest form of antique chest was a box with lid, known as the coffer. The antique coffer is the earliest type of antique furniture on record, seen as far back as the 13th century. It was made of six planks of wood joined by primitive old clout nails, called the six plank coffer. The coffer was designed to be portable, so some have handles on the sides and banded with iron for strength around the corners. The mule chest was a development of the coffer being impractical; it was difficult to reach items stored at the bottom of the chest so the coffer was fitted with a drawer in the base.

The 15th century, saw the first development of the antique chest of drawers.  They were of simple Pine panelled construction, with mortise and tenon joints, held by pegged dowels.  It wasn’t until the mid 18th century, antique chests were starting to be made more decorative with different shapes used like the serpentine front and the bow fronted chest did not emerge until the 1770s. 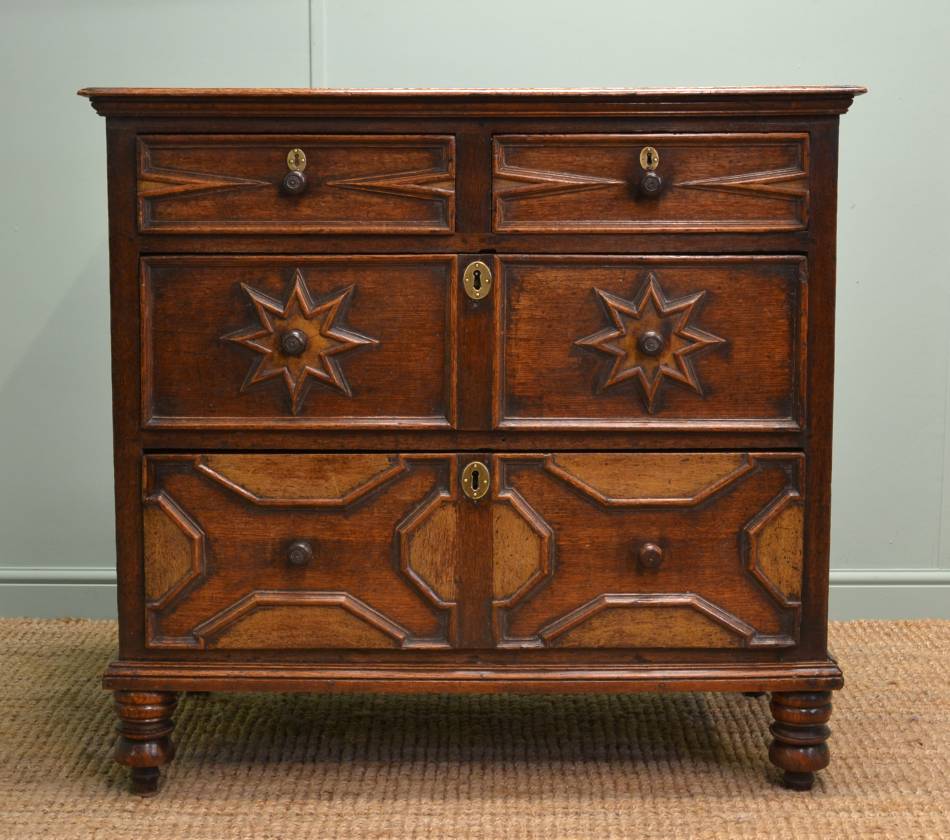 This Rare 17th Century Period Oak Antique Chest of Drawers has been constructed from 1″ thick solid oak drawer linings, clout nails, wooden pegs and the traditional side runners that run on bearers. The drawer fronts have Jacobean style geometric designs including the very unusual and striking eight pointed star.

Antique Georgian Chest of drawers, were a solid, well built handcrafted piece of antique furniture from the 18th Century. The Georgian period saw Britain establish itself as an international power and was an expanding its empire across the globe. Britain was becoming wealthier, so more houses were being built, meaning furniture was in higher demand. Every home needed an antique chest to store clothes, so Georgian chests were being made to order by skilled cabinet makers. The construction was solid, the very best having oak linings and hand cut dovetails joints. Dense Imported Cuban Mahogany or locally sourced solid Oak woods were the main timber used along with very thick veneers for decoration. Decorative oval embossed brass handles or swan neck handles were fitted and the chest would be finished by standing on robust shaped or Ogee bracket feet. The most sought after design from this period is the iconic Lancashire style with reeded quarter column decoration, a beautiful piece of antiquity. Georgian chests are quite simple in design and will have wonderful charm, character and a smooth patina as you would expect from an antique over 220 years old, impossible to reproduce. They will not only work in a traditional setting but can also look spectacular in a modern interior as a centre show piece against a plain white wall. 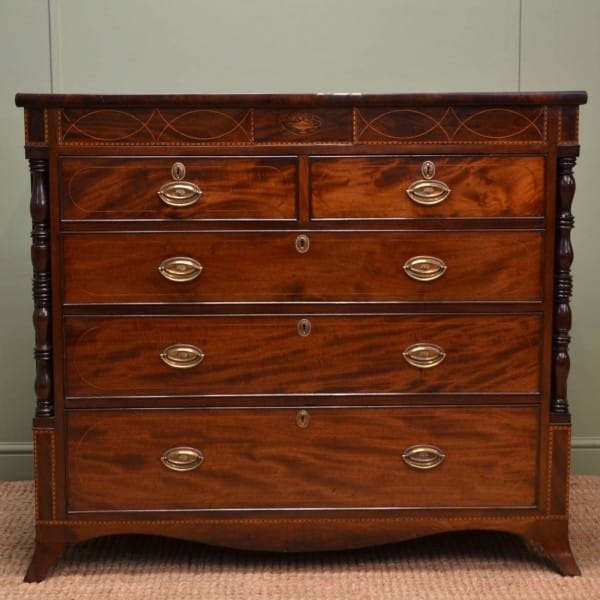 Other designs of the period were the antique chest on chest, also known as a tall boy. It is very tall with at least eight drawers and you often see Chippendale features like ogee bracket feet and a brushing slide. Earlier models are in walnut with feather banding, overlapping drawer mouldings and bun or bracket feet.

Antique Regency Chests are from 1810 to 1830. This is when antique furniture was still built by hand, showing true craftsmanship and attention to detail. The construction would have been hand cut Dovetail joints, with cock beaded edges and quality decorative brass fittings like Lion head handles or stringing. Antique Regency chests usually stood on bracket feet, like the Earlier Georgian style but the introduction of smaller turned feet also started to appear towards the later end of the Regency period.  Regency chests are usually elegant and simple in design, they come with a real sense of fineness and understated grandeur along with a beautiful charm, character and a lovely patina that cannot be reproduced. 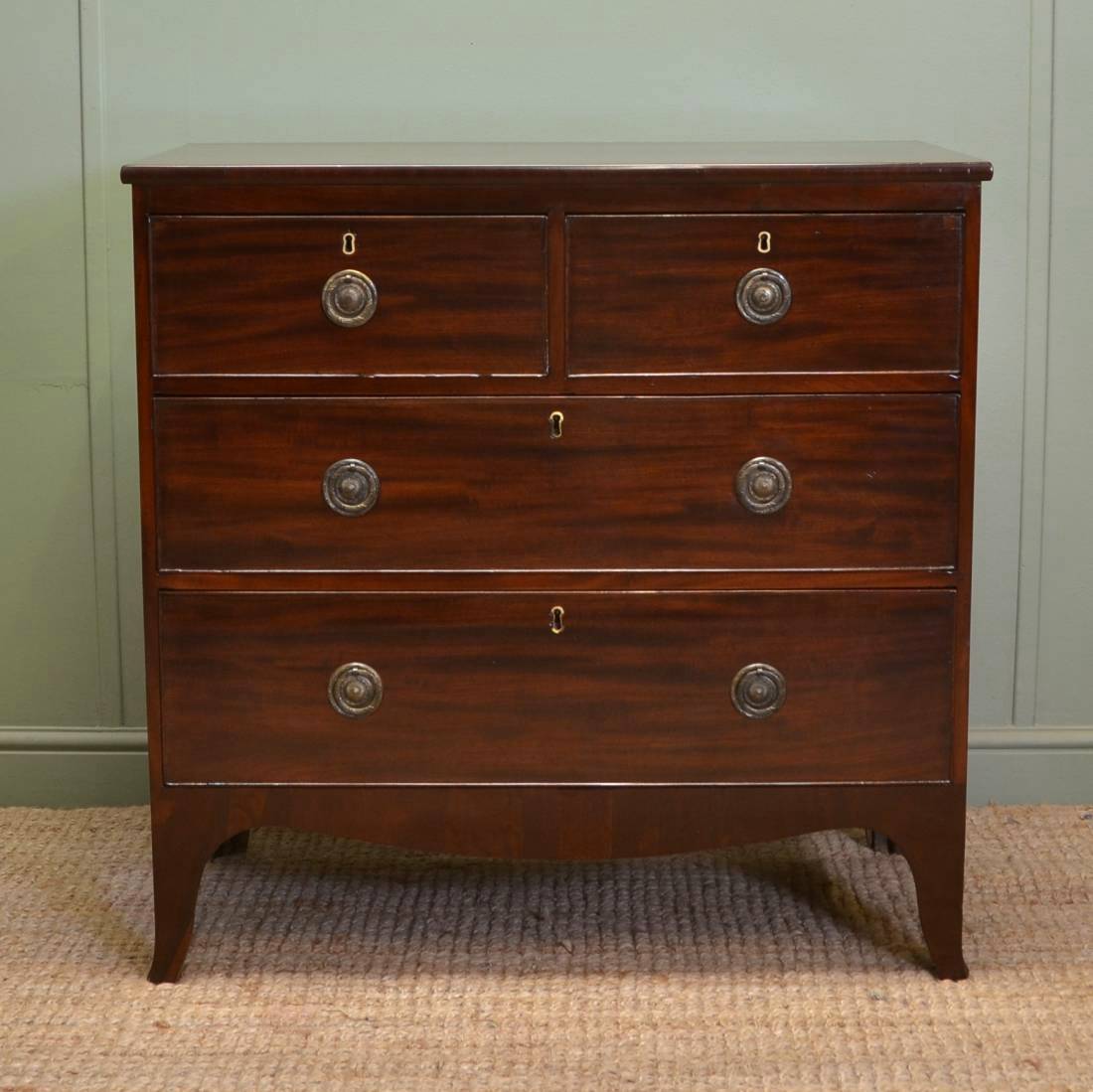 Antique Victorian Chest of drawers, were solid, and well constructed pieces of antique furniture, dating from the reign of Queen Victoria 1837 to 1901. Earlier Victorian chests were quite simple in design. They would have a square carcass but brass handles changed to wooden turned knobs. During the mid 19th Century, there was a boom in house construction, which led to demand in furniture to fill them. These houses were built with large rooms and high ceilings, so the Victorian cabinet maker, started to build very tall antique chests to accommodate this. Victorian Chest of Drawers had rounded curved corners; some intricately made with serpentine or bow front shapes, turned bun feet and highly French polished.

Toward the end of the 19th Century, Victorian chests were beginning to be mass produced with the use of new woodworking machines. This lead to traditional cabinet makers starting the Arts and Crafts movement. Earlier designs were re-introduced and built by hand with interesting features. These chests would be in Oak or Ash and would have solid brass handles. 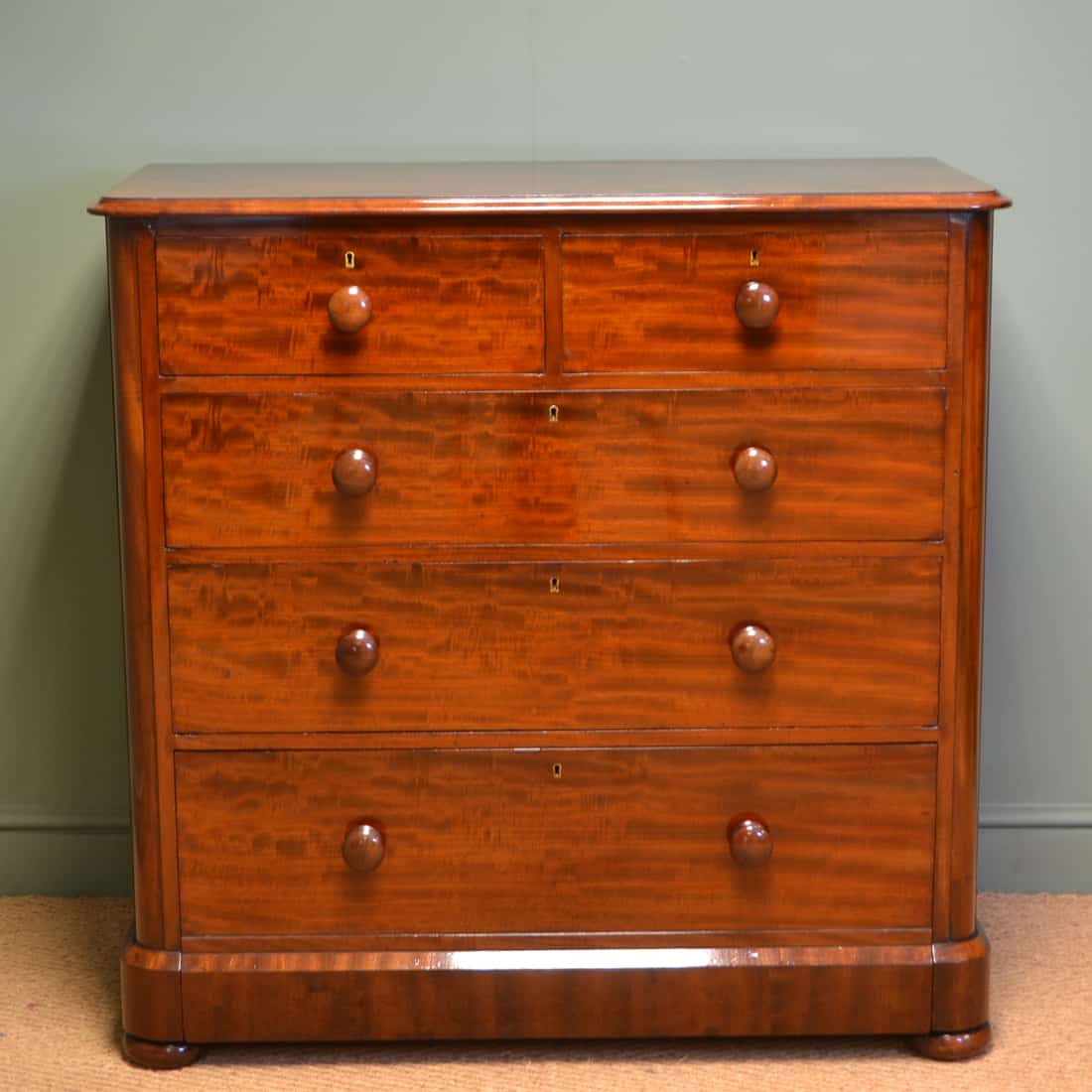 Antique Edwardian Chest of drawers, are from the reign of King Edward VII’s in Britain from 1901 to 1911. Edwardian Chests were now manufactured with the help of new wood machinery. Quality timbers were still used like Solid Mahogany, Satinwood and Walnut. Decoration would display satinwood cross banding along with boxwood and ebony string inlay to their fronts.

Earlier designs influenced their decoration, from Georgian Chippendale to Hepplewhite.  They would usually be highly French polished by skilled craftsmen, and produced by some of the best and most well known cabinet makers like Maple and Co along with Waring and Gillows. Some of the earlier Georgian and Victorian chests were recycled by the Edwardian cabinet maker. These small antique chests were restored so they would look good any home. Styles of Antique Chest of Drawers

Antique Bow Fronted chests are very desirable due to the level of craftsmanship required to create such a design. They were first introduced in the late 18th Century with a small brushing slide and curved front. The best examples have decorative features like turned reeded columns down the sides and the original brass handles.

The Serpentine Front Chest of Drawers is from the 18th and 19th Century with a wavy edge similar to the bow front but with half a bow front on either side. Only a very skilled Cabinet maker could produce such high craftsmanship, so they are quite rare to find as they were not commonly built. The rarest were from the Regency period with brass lion paw feet or with canted sides along with blind fretwork carvings and a pull out brushing slide. Victorian Cabinet makers introduced this wonderfully shaped design, but in appealing smaller proportions. 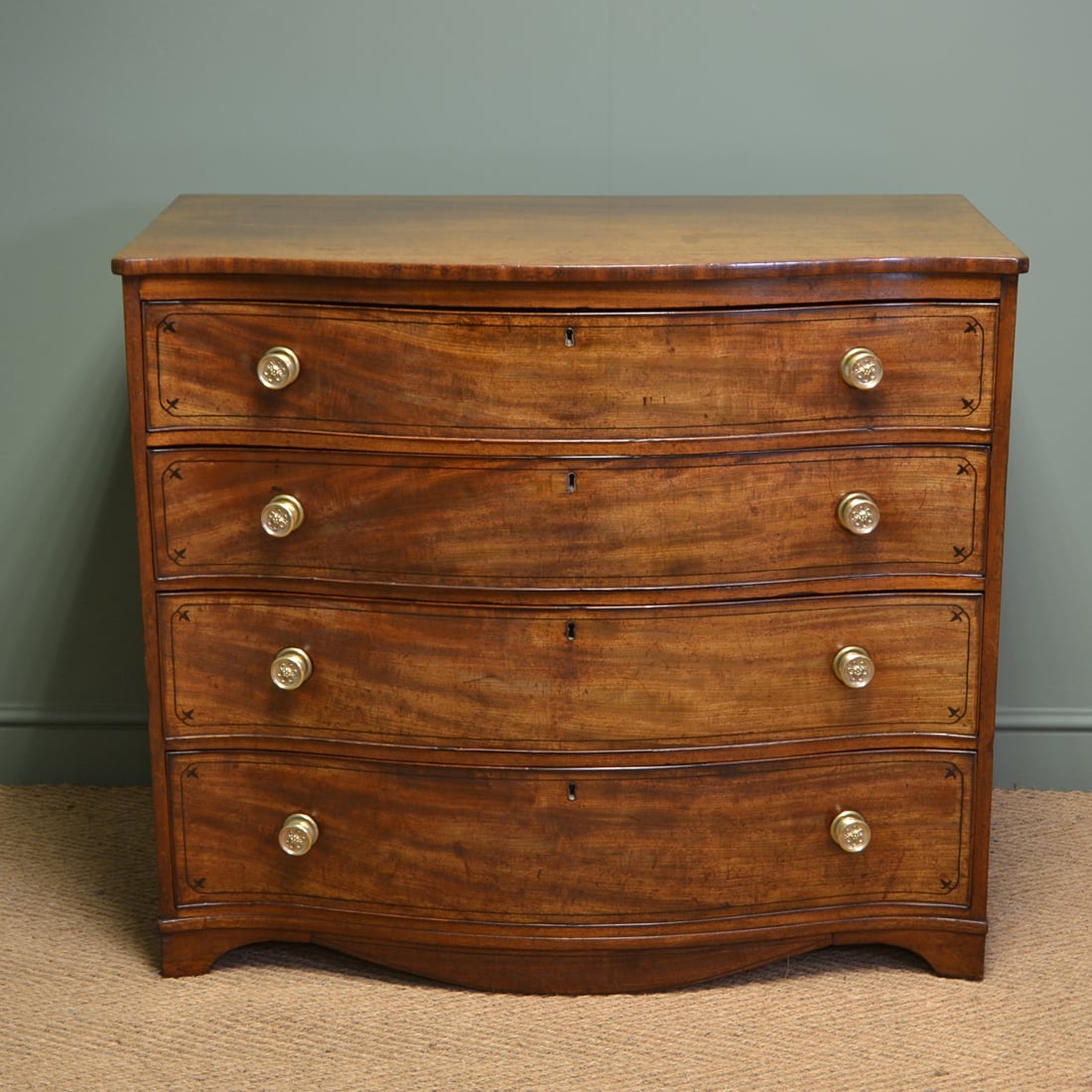 The Campaign / military chest was first seen in the Napoleonic wars, often in camphor wood or teak. They were designed to dismantle for transportation between camps. The Army and Navy Co-operative Society Ltd was formed by a group of army and navy officers that wanted to supply good quality furniture and other items to its members at very low cost. 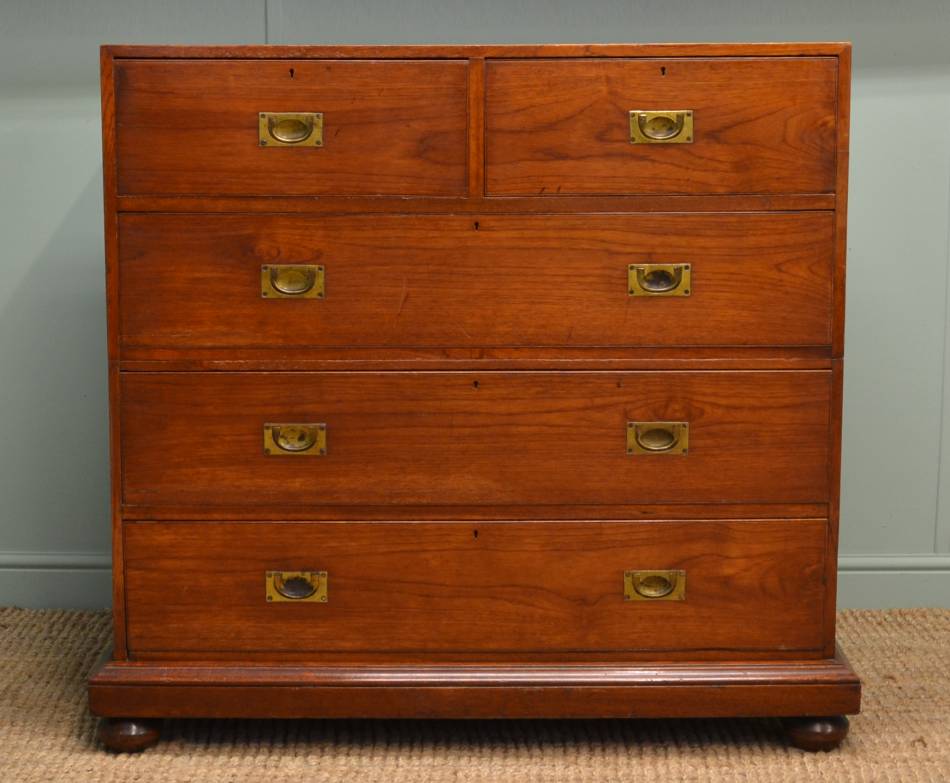 The antique Wellington chest was named after the Duke of Wellingtons victory of 1815. They are tall and narrow, usually with seven working drawers, one for every day of the week. Each has a swinging locking arm that locks all the compartments with one key.

This walnut antique chest was constructed in the early 1900s to a Queen Anne design and finished, using most probably, veneers from the early 1700s. This true gem of a piece is the antique equivalent of a listed building having been fitted out with the most modern of interiors for its time. The level of skill, craftsmanship and attention to detail is evident through-out this piece. The top is quarter veneered with beautifully figured cross banding along with feather banding. 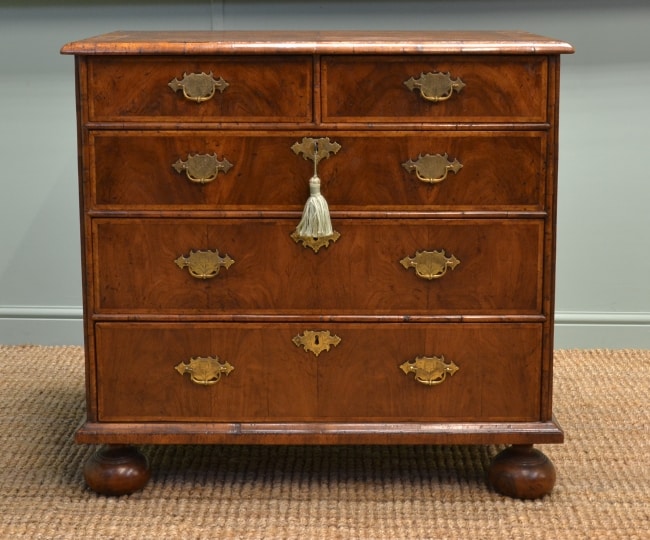