The History of Mirrors

Antique mirrors were first known by the name ‘looking glasses’ and they were first produced in Murano and silvered in Venice as early as the 16th Century. They were not made in England until the 17th century, It was Sir Robert Mansell’s glass house in London in 1625 where they were first made by the cylinder process (where cylinders of glass were blown then split open and laid flat), and then by the Duke of Buckingham at his famous glass works at Vauxhall. The limitations of this process meant that only small plates could be made so several pieces of glass would be used to create a single mirror. By the late 18th century larger and better quality plates were being produced enabling more larger and decorative mirrors to come onto the market. These were free standing and fitted onto antique furniture.

During the latter half of the 18th and 19th century, framing styles changed dramatically from elegantly carved gilt wood mirrors of the Chippendale period to beautiful polished frames like the antique cheval mirror of the Victorian period.

Did you know antique mirrors were recycled as early as the 1700s.

Recycling is a large part in today’s life and there was actually a form of recycling that started in the 18th century. There was a heavy tax on glass coming from abroad. Because of the failure of English factories to make large mirror plates in that period, it dictated the form and development of the mirror being created in Britain at that time. To avoid the tax and costly import of the larger mirrors from France, old mirrors were recycled. Larger mirrors were produced by creating frames which held several pieces of recycled glass, this gave the illusion of a single larger mirror. This continued  until the late 18th century when far bigger mirrors with much lighter frames were being produced.

By the beginning of the 19th century there was a rise in the popularity of small antique mirrors again, like the convex mirror. The convex mirror was produced for the dining room and its purpose was for the butler to keep an eye on the progress of a meal without having to move around the room disturbing people dining. 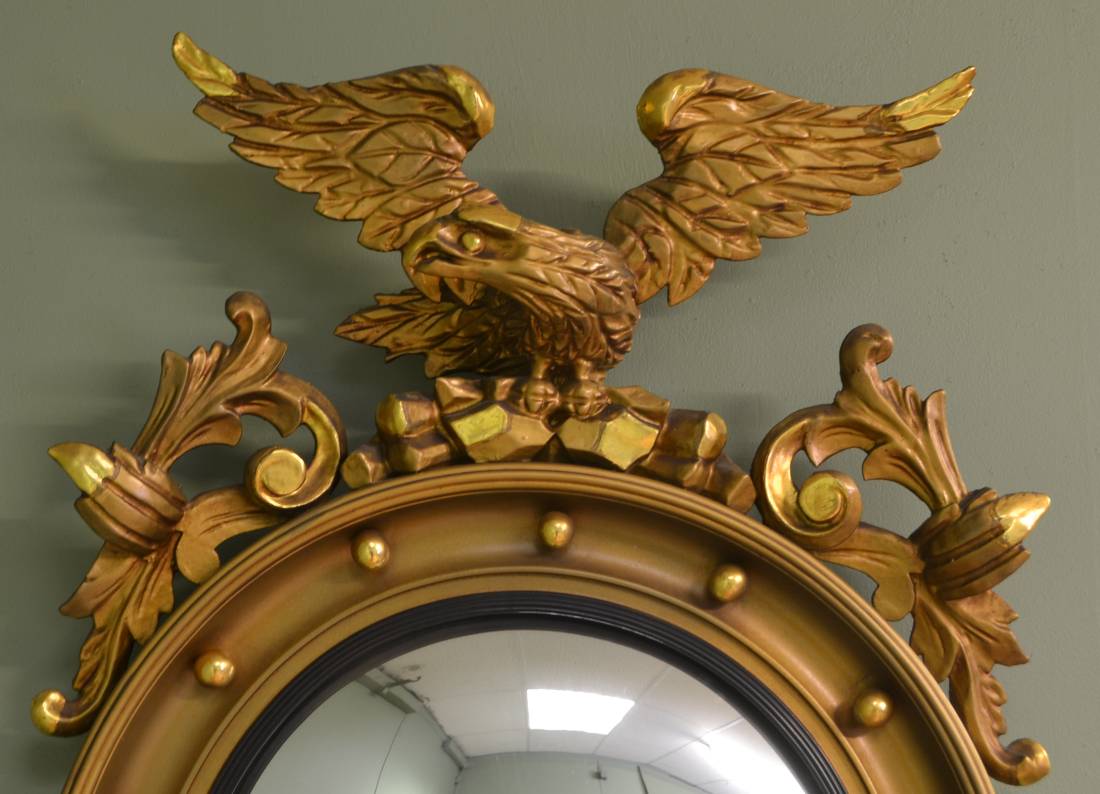 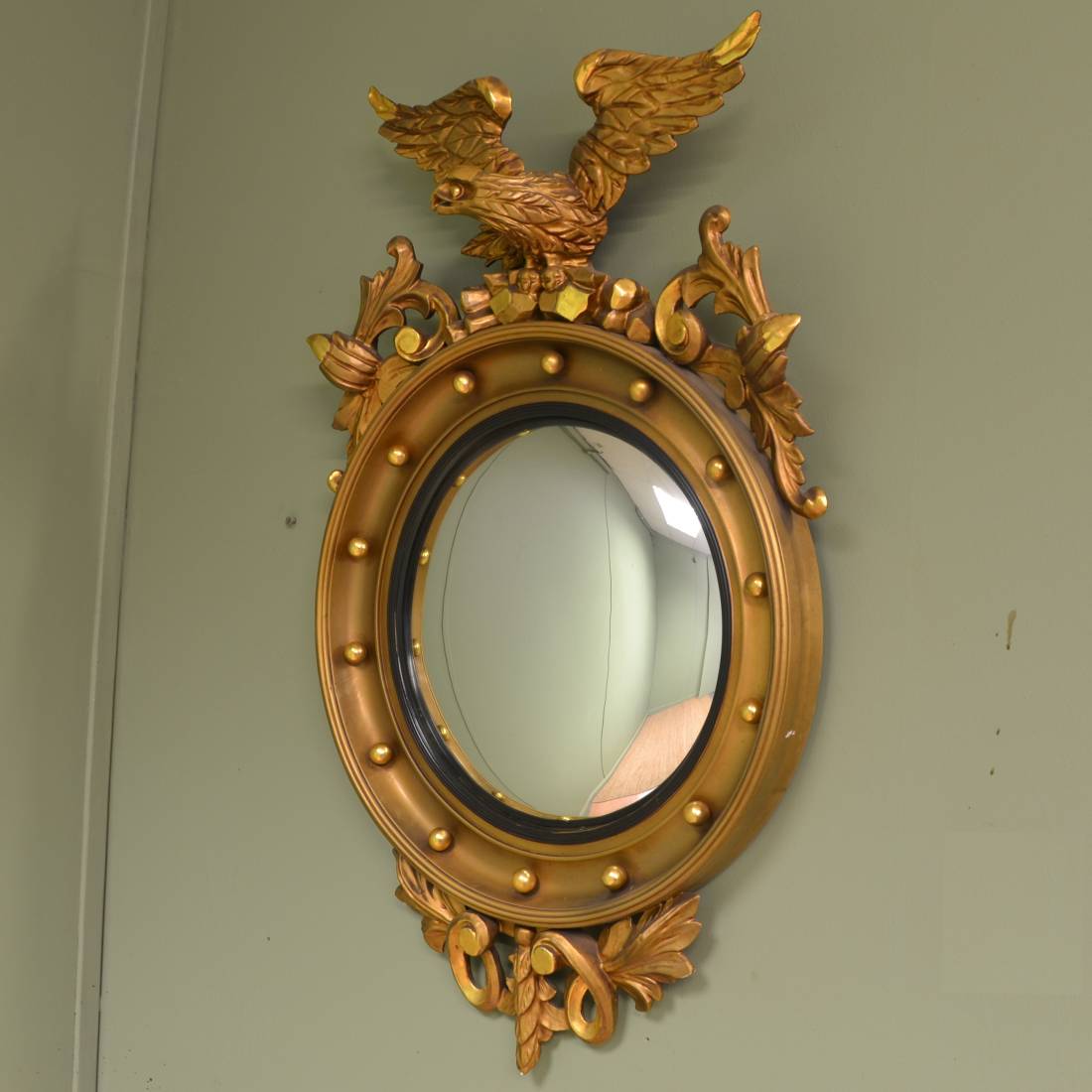 Antique mirrors were very rare up to the 1700’s. As the production of mirrors improved, more were made and larger, more grand versions came into existence. Large mirrors were still very expensive but the smaller wall mounted mirrors were cheap enough for people to buy. Earlier examples were made from pine with gilding finish and would often have pediments on the top with a prominent central motif in the form of an exotic bird or spread eagle. 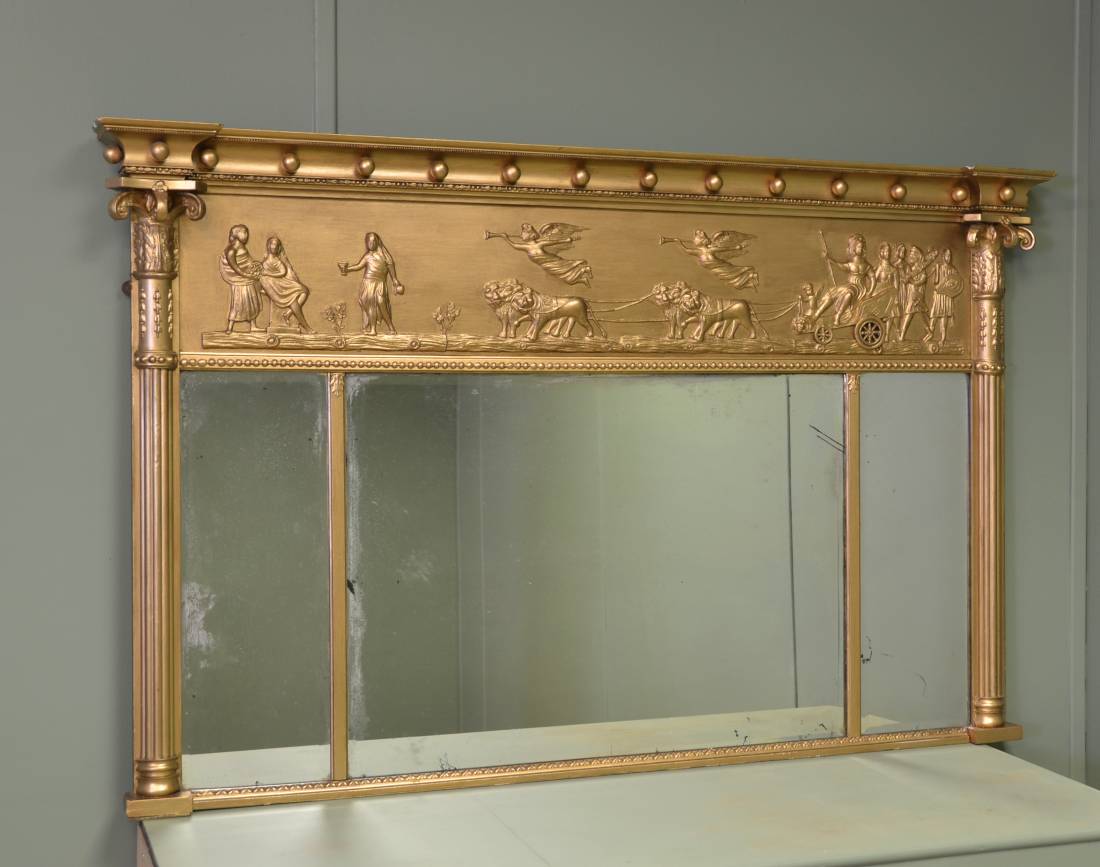 This mirror is flanked by column sides topped with Corinthian style capitals and decorative features.

19th Century mirror frames were often in Mahogany, due to the beautiful finish and the durability of carvings produced. Sometimes they were inlaid with a shell pattern. Adam and Hepplewhite, designed more delicately proportioned mirrors, oval and rectangular in shape, with simpler scroll work, inlaid vase or similar classical motif. Adam preferred gilt work usually on a soft wood and Hepplewhite usually used mahogany.

It was not until the late 17th Century that dressing mirrors became free standing. To begin with they were made of silver or silver gilt with trestle. During the later half of the 1600’s, Venetian and Parisian craftsmen supplied beautifully decorated toilet mirrors. In the early 18th century many antique dressing tables were designed with collapsible mirrors fitted into the tops of the tables. This was also seen in some antique chests of drawers. Early 18th Century toilet mirrors were sturdier in construction, and standing on plinth bases which had small drawers. The best were serpentine fronted and usually rectangular. It was not until the 1770’s that the oval shape mirror became available. 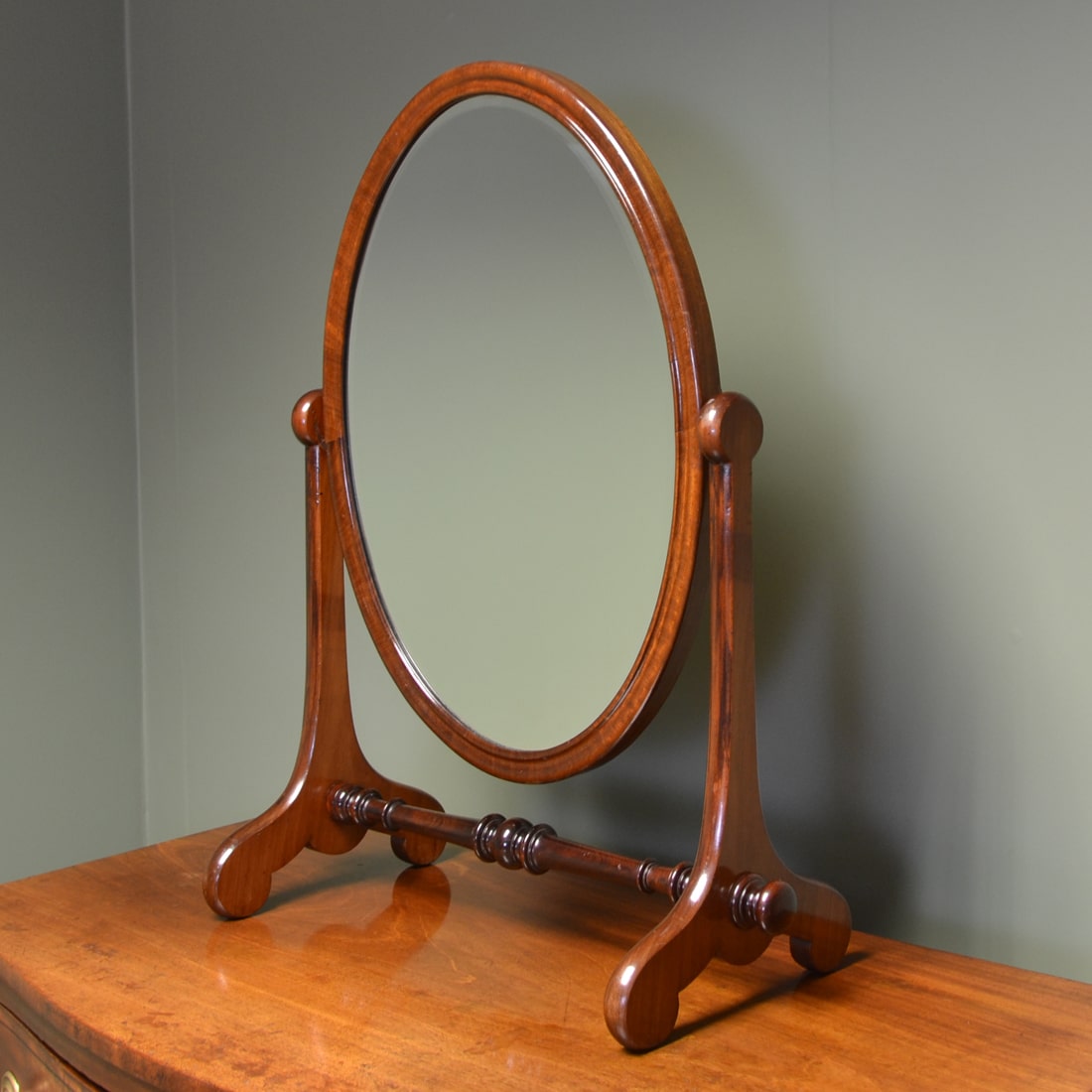 Antique cheval mirrors or also known as ‘standing dressing mirrors’ were first made in Paris. By the 1800’s large plates of glass could be cast, and the free standing mirror known as the antique cheval mirror became very popular. ‘Cheval’ means horse in French, and the name given to the mirror refers to its four supporting legs. 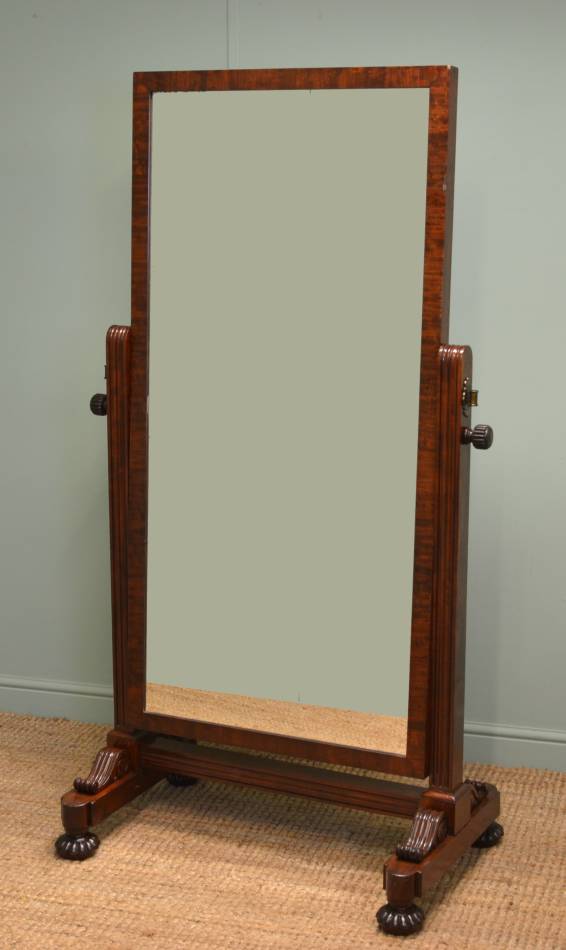 Above is an example of a Victorian Mahogany Cheval along side an elegant Regency Satinwood Antique Cheval Mirror. Both have the original tilting mirror and quality brass fittings.

Caring for your Antique Mirrors

If you want to care for your antique mirrors correctly, there are several things you can do. If the silver backing of a mirror has deteriorated (Foxing is a term when the silvering in antique mirrors goes misty and sometimes looks bitty), repair should not be attempted until investigation have been done, as any restoration can devalue the piece especially on very early examples. First check with an expert if repairing the silver will de-value the piece as some collectors will only buy with the original silver.

Cleaning the wood frame of your Mirror

To clean and restore the wood frame on your antique mirror, try the following. Use polish revive on a clean cloth and rub firmly in the direction of the wood grain. This will remove years of dirt without damaging the original patina. Once the dirt is removed, finish using a good quality bees wax.

Traditional methods used to clean the glass on mirrors.

Whichever method is chosen, it is essential to avoid and moisture getting behind the glass, as this will cause further deterioration of the silvering.

Remember it is nice to see some foxing in the mirror as this adds to the character of the piece and I recommend you should never replace the old glass unless absolutely necessary.

Remove the glass and scrape all the old silvering off the back of the mirror. Get a very thin piece of modern mirror cut to the same shape. When pushed onto the old glass it causes a vacuum effect and sticks to the old glass so then you can have the benefits of the old mirror but that is usable.